The cost of development in Himalaya 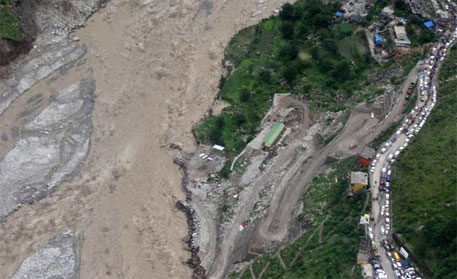 The extent of the Himalayan tsunami is still unfolding as I write. It is clear that we do not know how many people are still trapped under rubble; cut off by landslides and desperate for food and water. The human cost of this calamity will be horrendous, it is feared.

But even as governments and the army work on rescue and relief work, we must ask the question if this is only a natural disaster or has human action and inaction exacerbated the scale and magnitude of the tragedy?

Himalaya are the world’s youngest mountain range; they are prone to erosion, landslides and seismic activity and brutal rainstorms lash the region. Therefore, this region is vulnerable and fragile. But two human-induced factors make it even more risk-prone today.

First, there is a clear link between climate change and changing rainfall patterns in the Himalaya. Scientists are now, more than ever, certain that rainfall in India will become more extreme – in other words, there will be more rain but it will come in smaller number of rainy days. The Indian Institute of Tropical Meteorology in Pune, which has extensively studied the trends in monsoons in the country, finds that “moderate” rain events are on the decline and intense rain events are increasing. This is bad news for the Himalaya, as it means that there are higher possibilities of cloudbursts and “unprecedented” high rainfall over the region – as it happened on June 15 when in just 24 hours, over 240 mm lashed parts of Uttaranchal and Himachal.

Even though it cannot be said that this particular Himalayan tsunami is caused by climate change, the link to this event and the growing trend of intense and extreme rain events is clear and undisputable. Climate change is caused by fossil fuel use and emissions, needed for economic growth. So, this tragedy is human-induced.

Second, there is a link between the disaster and the manner in which “development” has been carried out in this ecologically fragile region. Over the past few years, particularly since the creation of the new state of Uttarakhand, the state government – be it Congress or BJP – has had only one interest – to exploit natural resources of water, forests or minerals without any care of the consequences. What is clear is that this kind of development has come at the cost of the environment.

Why do I say this? Take hydropower projects, as an example. There is no doubt that generation of energy is an important economic activity for the region – water is its natural wealth. But the question is if the Central or state government ever considered the cumulative impact of the hydropower projects on the rivers and the mountains. Currently, there are roughly 70 projects built or proposed on the Ganga, all to generate some 10,000 mw of power. The projects are being built bumper to bumper – where one project ends, another begins. In this way, the river would be modified—through diversion to tunnels or reservoirs — to such an extent that 80 per cent of the Bhagirathi and 65 per cent of the Alaknanda could be “affected”.

The projects do not plan to release water in the river during the lean months. As a result, large stretches of the river would be completely dry. The construction itself, at this scale, would have devastating impacts on the mountains – because of blasting to build tunnels and barrages. Worse, invariably, construction is carried out without the necessary precautions so that the risk of landslides is minimised.

Why build 70 projects? Why build without consideration for ecology? The fact is that these projects are lucrative for developers – the incentives and tariffs provided for hydropower is a sweet deal. So, the interests are high; the stakes are high. And in all this, what is forgotten is the cost of these projects on the fragile ecology of the region. This is not to say that the state does not need energy or that hydropower projects should not be built at all. The question is what and how much should be built. The question also is how the projects should be constructed so that impacts can be minimised. The bottom line is to ensure that this development does not lead to destruction and increase vulnerability of this already fragile region.

Clearly, the need is to do things differently. The region needs development – people who live there need basic amenities like roads, electricity, health care and education. They need employment and livelihood options. But equally it is clear that the economic future of the Himalaya and its people can never be secured or safeguarded if the already vulnerable region is made more hazard-prone and more deadly. Development cannot come as the cost of the environment, not in any region of the country; but particularly not in the Himalaya. What we need is a new way – the Himalayan way of economic growth that is sustainable. Without this, there can be no future for the region or its people.

The result otherwise is dire and deadly. Something we just cannot afford.


A selection of reports and documents on hydropower development at Uttarakhand