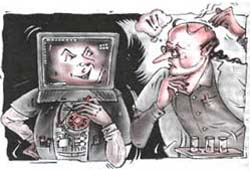 STEP aside professor, your computer is about to make an important invention. Yes, intelligent computer programs are beginning to make discoveries of their own, as well as saving valuable research time. Stephen Muggleton, a computer scientist at the University of York, UK, has been working with molecular biologists at the Imperial Cancer Research Fund to automate protein analysis. Recently, the team reported two discoveries - a previously unknown cancer-causing chemical and new rules governing the three-dimensional topography of protein structures.

Using a technique called inductive logic programming, they created an artificial intelligence (AI) system capable of making predictions based on the knowledge supplied by the biologists and on rules learnt from the system's "experience". The techniques could also have a huge role to play in the future of scientific research: "The algorithm is producing results in a matter of minutes rather than years. AI is going to have a significant impact on the drugs industry and the way we do science in general," says Muggleton.

The recently-concluded European Conference on Artificial Intelligence, held at Brighton, UK, also heard that the University of Edinburgh, UK, has used a similar program called HR, to make mathematical findings. In August, HR "discovered" a new sequence of integers, called refactorables. The sequence has been accepted into the Encyclopaedia of On-line Sequences, the main global repository for such information, say the researchers.

Toby Walsh, member of the Edinburgh team, says HR'S intelligence comprises a set of heuristics, or human rules of thumb. "The heuristics are sufficiently strong that we don't need to do much brute-force searching," he says. Both Muggleton and Walsh are quick to point out that scientists should not feel outdone and hang up their lab coats. "What we're doing will help mathematicians understand how they do mathematics, so they may be able to do it better," says Walsh.

When the human genome project is finished, the scientists will have a complete map of the gene sequence. "But," says Muggleton, "we won't know what it all means. The tools we're developing are interface techniques for dealing with this data swamp."

Also featured at the Brighton conference was a unique driving simulator that not only teaches driving, but also helps the learner to cope with the behaviour of the other motorists on the road. Steven Wright, a computer scientist at the University of Leeds, UK, has worked out a way to make cars in a simulator "behave" as though they were being driven by "real" people - some aggressive and some drunk.

Each "drone" vehicle - the simulated cars - in the Leeds simulator has its own distinct personality modelled on extensive research into driver behaviour in the real world. Depending on their personality, age and sex, the drones show varying levels of aggression, fatigue or alcohol consumption. The effects of these on their driving are expressed through their speed, stopping distances and reaction times.

Wright says existing simulators are highly predictable and sometimes even unconvincing. "For a simulation to be effective we need the environment to be realistic, otherwise the driver won't respond as they would to a real vehicle," he says.

His model uses an algorithm based on fuzzy logic to vary the mix of drivers on the road at a particular time. Wright says it is quite possible for these drones to crash into each other, but it is impos sible to predict when.