The gastronomic path to cancer cure

Certain fruits and vegetables guard the body against cancer 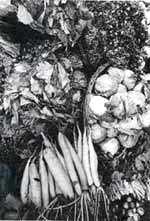 MOMS have for generations been singing the virtues of green leafy vegetables, usually to deaf ears. Now, new findings vindicate their emphasis: scientists suggest that vegetables like spinach are not only essential for balanced growth but could also guard against several types of cancers -- including cancers of the colon, rectum, prostrate, stomach, ovaries and breast. Research has also revealed that fried and fatty foods, salted fish and even the all-American favourite hotdog, could cause cancer in the stomach.

Scientists believe that the cancer-warding-off effect of certain vegetables and fruits may be because of their rich vitamin concentration. Tagging along with this this line of thought, several pharmaceutical manufacturers have claimed that vitamin supplements can also protect against cancer. But the scientific evidence for this claim has been mixed, generating controversy. And some studies reveal that beta carotene, a commonly used vitamin supplement, could in fact lead to lung cancer (see box).

However, several experts agree that an increased intake of vegetables and fruits could reduce the risk of colon and breast cancer. In vegetables, the apparent protective effect is due to vitamin A, while in others it may be folic acid or the fibre content.
In one of the most convincing studies to date, scientists from the Dunn Clinical Research Centre in Cambridge, UK, have shown that a diet rich in soya protein can alter a woman's hormones in a way that mimics the effects of the anticancer drug tamoxifen. The bland products of soya bean such as soya milk are rich in plant hormones known as "phytoestrogens". These are similar in structure to human oestrogens, with which they compete, diluting their effect. Because scientists believe that breast cancer is related to the exposure to oestrogen, anything that reduces this exposure, such as phytoestrogens, lowers the risk of developing breast cancer.

In India and in the UK, researchers have been exploring the anti cancer impact of turmeric. Researchers explain that this spice commonly used in India contains curcumin which kills bacteria and also protects against tissue damage. Other researchers are studying green tea, broccoli and fish oil for their possible role in checking tumours.

Some scientists are working on the harmful effects of an unbalanced diet. Walter Willett from the Harvard University, Boston, for one believes that a consumption of energy rich foods like fats can increase the risk of breast cancer. Animal fat or red meat increases the risk of colon and rectal cancer in both men and women, he says.
Ovarian cancer, too, may be affected by the levels of fat consumed by women, says Risch. His research reveals that consuming 10 grams of saturated fat a day may raise the risk of a woman getting ovarian cancer by 20 per cent. This, he explains is because animal fat may contain oestrogen, which is the main risk factor for ovarian cancer.

Deep fried and charred foods, especially meats and fish, can also induce cancers, contend other scientists. These are rich in polycyclic hydrocarbons which are known to induce changes in cell DNA; interestingly, B Nagarajan of the Cancer Institute in Madras found that their concentration in cooked food was greater than in the raw food.

Stomach cancer, according to Nagarajan, is the third most common type of cancer in south India, for which the practice of salting meat and fish in this region could be responsible. He explains salting leads to chemical changes in fish and mutton which could generate potent carcinogens in the stomach. Sigetosi Kamiyama of the Sendai Research Institute of Preventive Medicine in Japan says that he has also found that a high intake of salted foods, especially fish, could be responsible for stomach cancer.

A most unexpected offender that several scientists are now pointing fingers at is the sausage in a roll hotdog. This all time US favourite, preliminary reports from the University of Southern California Medical school reveal, could increase the rate of leukaemia. It has been recorded that children who consumed more than 12 hotdogs per month and whose fathers had also consumed a similar amount, ran a 9 times greater risk of developing leukaemia than normal. The scientists believe that certain chemicals used as preservatives in cured meat, to add colour and give a distinctive flavour, may undergo chemical changes and be responsible for the damage to blood.