Recently, the US-based General Motors has rammed into a controversy involving nearly half a million of its luxury cars spewing alarming amounts of air pollutants 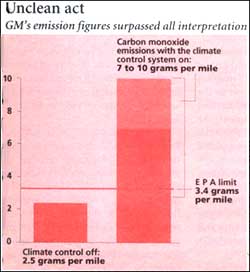 THE giant of the automobile industry in states - the General Motors has been caught red- sav the triumphant tal Protection Agency (EPA) w the us. The company had an emission control device in Cadillac luxury cars, which tbt vehicles to emit illegal of carbon dioxide. A suit was t the company by the us Department - which, inciden am &-ting on behalf of the EPA.

GM authorities, obviously anxious to dw wue as early as possible to afa ansavoury public response, have Aumd so recall nearly half a millon mud to spend nearly $45 million other costs. The recall of the INOWMbiles itself will cost the million.

"The GM's action has sacrificed public health and defied the laws," raged Carol Browner, the EPA adminstrator. And environment groups in the country are spitting fire and brimstone. "I've dealt with the auto industry in an adversarial way for many years, but I IiLve never seen a deliberate, wilful effort to break the law that is as blatant as this appears to be," screamed Daniel Becker, a lobbyist working with the front-running environmental NGo - the Sierra Club. The charges levelled against pretation the General Motors brings into light outright damaging standards employed by the company. It has been accused of selling cars that violate the Clean Water Act, 1972, as it manufactured and sold devices completely ignoring pollution controls, and failed to report the use of the devices.

This is certainly the largest case ever brought under the strict scrutiny of the Clean Water Act rules which specifically governs automobile emissions. The settlement, if approved by the us District Court in Washington, where it has been filed, would stand out as the first instance of a case where the court has ordered a recall of automobiles for violating emission standards and duping the government. The EPA, in the course of its routine testing of new models, stumbled upon this major slipup, and immediately swung into action.

According to government agencies, the General Motors had designed a new computer chip in 1990, for engine controls on Cadihac Seville and Deville models, after customers complained that the cars had a tendency to stall when the system that operates the heating and air conditioning inside the car running. The new chips were pro was grammed to inject additional fuel into the engine whenever this climate system was not operating. But the resulting exhaust was found to be too rich in carbon monoxide. The catalytic converters were not equipped to contain the gas and coDsequeDtly, tailpipe emissions alarmingly rose to double or triple the allowable levels.

Carbon monoxide is one of the six main air pollutants listed under the health-based standards of the Clean Water Act. It can cause heart problems, headaches and impaired vision. Exposure to excessive levels can even prove lethal.

The cars sold by the General Motors are normally driven with the air conditioners running. But when they were certified at the factory, they were tested with the systems off. Therefore, the Cadillac's high pollution levels were not registered in those tests, explains EPA officials.

The Gm authorities are in a tight spot, but they still refuse to shoulder the entire blame. "We strongly disagree with the allegations made by the Federal government," grumbled Dennis Minano, GM'S vice president of corporate affairs. He called the case a "a matter of interpretation" of complex regulations. But he emphatically stressed that the company "had worked very hard to resolve the matter and avoid litigation."

Minano's defence line to safeguard the company has failed to make a dent in the opposition camp. Lois J Schiffer, assistant attorney general for environment, is convinced that "the GM knew what it was doing". Thomas P Carroll, a Justice Department environ- mental lawyer, was particularly critical of the GM for continuing to use the chip in the cars, even after they discovered the problem way back in 1991. "They should have gone back and re-engineered it to improve the emissions," he contends.

But the GM is paying dearly for its slip. Besides the huge fine, the GM will also have to spend $8.75 million as part of a corporate community service penalty which will include providing district schools with new buses that run on batteries or any other cleaner fuel.