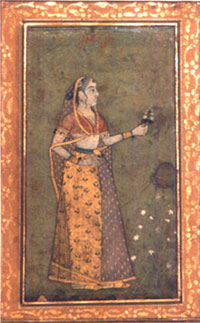 Unlike other tribes of central India, like Madia, Baiga, Korku and Korwa, who live a close-to-primitive life in the forests, the Gond tribe does not have a uniform cultural or socio-eocnomic identity. These other mentioned tribes are still living, for the most part, a reclusive low-carbon-footprint life, involving hunting-gathering and some amount of agriculture. Modern education and economic prosperity through entry into the mainstream economic system is a relatively new phenomenon. For instance, the first medical doctor and lawyer from the reclusive Madia tribe are in their 30s.

The Gonds, as a community, however, have a much more varied social profile. While a significant section of this community still lives a close-to-nature life involving hunting-gathering, some forms of agriculture and pastoral activity, some sections are no strangers to political and economic power since as early as 15th century. For almost four centuries, the Gonds ruled almost the entire hilly region of central India, including parts of Madhya Pradesh, Chhattisgarh and Vidarbha in Maharashtra. Give and take with the dominant culture of the Hindu and Muslim royal families of those times, including inter-marriage, was common, leading to the evolution of a ruling class culture heavily influenced by the Mughals in Delhi and the Rajput clans with whom the Gonds alternately fought and entered into alliances with.

This diversity in social and economic standing brought on by these four centuries of power continues to this day. While a sizable part of the community still lives in the villages in a lifestyle similar to other forest-dwelling tribals in the region, there is also a significant urban population in almost every city of central India. Education levels are high in the community compared to other tribal groups and the numbers of Gonds in the service sector, including government jobs, and in business are high.

The story of the rise of the Gond community to political power and then its gradual political and economic disenfranchisement not only make interesting reading, but also raise questions about how this stint in power and the non-tribal influences on its ruling classes might have impacted Gond culture.

This latter question is particularly interesting. On the one hand, the original culture of the Gond tribals was most likely a close-to-nature one, singularly lacking in political ambition – brought out by the fact that Gonds did not make attempts to establish kingdoms till after they had been ruled by the ambitious Hindu ruling dynasties for some centuries. The Gond ruling class, however, had to perforce employ the same essential tactics for enhancing revenue and retaining power that their Hindu and Muslim counterparts used – clearing forests, extending agriculture, irrigation and trade – moves which might have impacted the tribal Gond community in much the same way as they did when practiced by others. In absorbing the influences of Rajput and Muslim ruling classes, they also ended up bringing these elements into the culture of the community.

How did these complex pressures impact the community at large, its status and its culture? There are not many clear answers, but a look into history offers tantalizing glimpses. 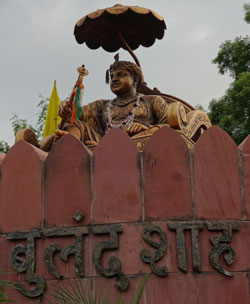 The first historically recorded Gond kingdoms came up in central India’s hilly region in the 14th and 15th century AD.  The first Gond king was Jadurai, who deposed the Kalchuri Rajputs, at whose court he had earlier worked, to grab the kingdom of Garha Mandla (modern Mandla and Jabalpur in Madhya Pradesh). The most illustrious rulers in this dynasty were the iconic queen, Rani Durgavati, whom the Gond community reveres, and Hirde Shah, the first Gond king to adopt Islam.

The second kingdom of Deogadh (Chhindwada in Madhya Pradesh and Nagpur in Maharashtra), was created by King Jatba in the 15th century. One of his successors, Bakht Buland Shah, converted to Islam to win the favour of emperor Aurangzeb. However, he did not demand conversion from his subjects and married a Gond woman. He fell into disfavour in Delhi after he plundered some Muslim kingdoms of Deccan.

Around the same time as Deogadh, the Kherla (Baitul in Madhya Pradesh to Chikhaldara in Amravati district in Maharashtra) kingdom also came up. Its first king, Narsingh Rai, who deposed a Rajput ruler, had love-hate relationship with the Rajput and Muslim rulers in his vicinity who attacked his fort due to its geographical accessibility. The kingdom was later annexed by Bakht Buland Shah.

The Chanda kingdom (Chandrapur in Maharashtra), a contemporary of the Kherla and Deogadh kingdoms, produced several remarkable rulers who developed excellent irrigation systems and the first well defined revenue system among the Gond kingdoms.

The sway of the Gond kings came to an end in the 18th century after Raje Raghuji Bhonsale, a warrior of the  Bhonsala Maratha clan, first annexed the Nagpur-Kherla kingdom, while Gadha Mandla was taken over by the Peshwas. Chanda held out for a little longer, but with the advent of the British who first entered into treaties with the Marathas and then annexed them, the last traces of Gond rule were wiped out.

The reign of the Gond kings is characterised by the rather remarkable phenomenon where the culture of the ruling class was strikingly different from that of the Gond community at large. In fact, the ruling class emerged not by adhering to its root culture but by adopting the culture and methods of its adversaries. This results in interesting paradoxes in history. One of the best instances is Rani Durgavati, revered by the Gond community as a symbol of the glory of Gond womanhood, was actually a Rajput princess married to the Gond king Dalpat Rai. Her claim to fame – her “valorous” decision to choose death instead of dishonor in the face of impending defeat at the hands of Akbar’s viceroy, Asaf Khan, shows values associated with Rajput womanhood– Gond tribal culture does not lay much stock by concepts of honour.

The father of the famous king Hirde Shah, Prem Narain, who had adopted Hinduism, was killed in a fight with Jhujhar Singh of Orcha because the Gonds did not honour the cow. Hirde Shah himself embraced Islam, but his pedigree of Gond kings, written by a Brahmin, starts with obeisance to the Hindu god Ganesha. Both Prem Narain and Hirde Shah tried to keep their religious beliefs to themselves, while leaving their subjects to practice their own faith. So did Bakht Buland Shah of Nagpur.

However, the influence plays out in complex ways. Historians and travelers like D D Chatterton, Sir John Malcom and Captain J Forsyth record that the Gonds had acquired customs like the worship of Hindu deities from Rajputs, and barbaric customs like human sacrifice to ensure victory for rulers had also been imported. The Danteshwari temple at Dantewada in Chhattisgarh, dedicated to a goddess modelled on the Hindu goddess Kali, was notorious for such sacrifices. As late as 1842, the Rajah of Bastar is recorded to have sacrificed 25 human victims to ensure his safety in a long journey.

Some of these hair-raising customs were also absorbed by the common populace. Chatterton records a case in Bastar where an elderly Gond man was punished for butchering an old woman as sacrifice under the belief that such an act will help in building a dam that was breaking mysteriously at the same spot again and again.

Gonds in large numbers were also killed in Rajput-style honour wars that their rulers undertook under the influence of Rajput culture. One of the most horrifying is the last war between royal brothers, Burhan Shah and Akbar Shah, grandsons of Bhakt Buland Shah, in Nagpur, which resulted in the cold-blooded butchering of 12,000 Gonds and finally enabled Raje Raghuji Bhonsale to annex Nagpur. Another such bloody battle over a question of honour is recorded between Bir Shah of Chanda and Durgpal of Deogarh.

One can only imagine the impact these developments had on the Gond tribe – both the forest-dwelling bulk of them and the small section gathered around centres of power.

Impacts on resources and economy

While there is not much focused material available on the subject, it is possible to guage that the impact of their kings on the resource base and economy of the Gonds from different historical sources. As mentioned earlier, the Gond kings applied the same methods as their adversaries to enhance revenue. Two of the most important such measures were the clearing of forests to extend agriculture and the building of tanks and dams to extend irrigation. The Gonds also encouraged cash crops. In the high rainfall areas of eastern Vidarbha, commercial paddy and sugarcane cultivation and gur (jaggery) making was pushed. A research centre set up by Gond kings of Chanda to improve the quality of jaggery still stands in Gadchiroli district of Maharashtra.

How was the larger Gond populace impacted by this? The Gonds were mostly a race of hunter-gatherers who practiced rudimentary agriculture and pastoral activity. Clearing up of forests can be expected to have immediately impacted their forest-dwelling lifestyle. Also, to enhance revenue from agriculture, an art yet to be mastered by Gonds, the kings were forced to invite expert cultivators from other communities to settle on the cleared land.

In doing this, rulers do not give an impression of having the interest of their community at heart – the most important motive appears to have been revenue enhancement necessary for retaining power. Bakht Buland Shah of Nagpur is recorded by Chatterton to have given land on equal terms to Gonds as well as Hindu and Muslim cultivators. Hir Shah of the Chanda dynasty, credited with having created a most impressive irrigation system in the modern districts of Bhandara and Gondia, achieved this feat with the help of the Kohli community from north India, who were expert tank and dam builders. In return for their service, he gave the community khudkasht or ownership rights to all the lands irrigated by these structures.

The results of these moves were not of particular benefit to the Gond community. Not only did the clearing of forests and allotment of land to outside communities cut into the traditional resources of the Gonds, but not being adept at commercial agriculture, they fell prey to economic privation and debt as a consequence.

Indore-based writer Rahul Banerjee of the non-profit Dhak Gramin Vikas Kendra, in his environmental history of central India, Recovering the Lost Tongue, has mentioned how Maratha brigand-turned ruler, Shivaji, pushed money lenders into the tribal areas of central India to finance his campaigns against Mughal potentate Aurangzeb. The reigning Gond kings, evidently, could or did little to prevent this new style of exploitation.

Over time, the outsiders flourished, while the tribals either went back to forest-dwelling lifestyles, distanced from the seats of power, Gond or otherwise, or fell into poverty, debt and land loss. This social pattern can still be observed in the Vidarbha region and the Madhya Pradesh tribal belt.

The process of siphoning resources from the tribals to non-tribal, commercially adept communities from outside the tribal belt was intensified during the rule of the Bhonsala kings when Maratha cultivator community of Kumbhi (modern Kunbis) poured into the region and Marathi replaced Gondi as the official language, and then during British rule when cash crops like cotton were introduced, but the fact remains that the Gond kings willy-nilly played a significant part in opening up this once difficult to access hilly and thickly forested region to plunder by the outside world.