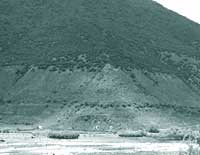 through Tibet flows the world's highest river -- the Tsangpo, with an average elevation of 13,000 feet (about 3,960 metres). In historic times, chunks of glacial ice would dam the river, creating huge lakes. New research shows the most recent of these lakes broke through its ice barrier between 600 and 900 ad, causing massive torrents of water to sweep through the Himalaya into India. The Tsangpo is a tributary of the Brahmaputra.

Geological findings indicate the existence of at least three lakes at various times, according to University of Washington geologist David Montgomery. Carbon dating shows the most recent lake -- about 240 metre deep and spread over 790 square kilometres -- burst through the ice dam between 1,100 and 1,400 years ago, rapidly draining some 80 cubic kilometres of water. The second lake, more than 680 metre deep, dates from about 10,000 years ago, and likely held more than 832 cubic kilometres of water (more than 80 times the capacity of Gobind Sagar, the reservoir at the Bhakra-Nangal dam). When its vast ice dam broke, it caused one of the greatest floods on Earth since the last ice age.

"Water may have been close to the crest of the Himalaya," Montgomery said. "Not the high peaks but the passes, and they were probably blocked by ice too. It probably was like an ice-dammed ocean up there."

The findings were presented at the recently-held American Geophysical Union fall meeting in San Francisco.