The great train hold up 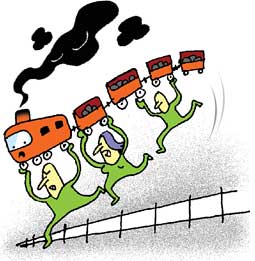 Climate change campaigners who hijacked a power station coal train in the UK last year have been accused of planning to turn their trial into a second public protest. Prosecution lawyers claimed that 22 men and women who clambered aboard a 21-wagon supply service to Drax in north Yorkshire last year were bent on "misusing the court process to continue the action." The dock at Leeds crown court overflowed as the group, aged between 21 and 48, pleaded not guilty to obstructing a railway engine contrary to UK's Malicious Damage Act of 1861.

"They took control of the train," said the chief prosecutor, Richard Mansell "and then started shovelling its coal on to the track below." Makeshift tents were erected on two of the wagons while other protesters manacled themselves to the train using locks that police specialists did not cut through for 16 hours.

The protest was aimed at greenhouse gas pollution from coal-burning at Drax, the largest power station of its kind in Europe, and trains were disrupted for two days. Mansell told the jury that this cost the government US $50,000.