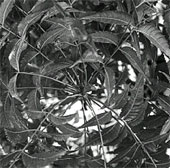 here is some good news for all Indians who are tired of hearing how the country's biodiversity and indigenous knowledge is used by 'Western' agents and how Indian scientific institutions and industry do little to utilise them. The Central Institute of Medicinal and Aromatic Plants (cimap) in Lucknow, Uttar Pradesh, has announced the development of herbal fumigants to control pests as well as mosquito-repellent incense sticks based on neem (Azadirachta indica).

While the mosquito-repellent incense sticks are already being marketed by two Lucknow-based companies, the herbal fumigants are yet to be produced on a commercial scale, although a patent has been filed. The institute is negotiating with a couple of firms and will transfer the technology once a deal is clinched. The fumigants are the result of four years of research.

"We cannot disclose the herbs and their components until the patent is granted and we transfer the technology to a firm. But the plants used are all quite ordinary plants, which can be grown anywhere, even in your backyard," said a senior scientist of the institute. "You can say these pesticides have all the virtues of normal chemical-based pesticides, but they have not taken any of their negative effects," he added.

The fumigants are available in nugget and tablet forms. The nugget has been prepared for bulk use such as in godowns and has been found quite effective at controlling certain pests found in pulses, wheat and rice. The tablets, on the other hand, have been prepared with a slight variation in the ingredients and for domestic use.

It is claimed that the fumigants are non-toxic, non-corrosive and do not affect the seed, quite unlike most chemical pesticides. Two chemical fumigants commonly used at present, methyl bromide and phosphine (celphos), are also not considered safe. While the former is believed to contribute to the depletion of the Earth's ozone layer, celphos has been found to cause genetic aberrations. Unlike chemical pesticides, the herbal fumigants do not leave possibly harmful residues. They have very low rates of diffusion, and the stored foodgrains can be used immediately after exposing them to sunlight for a brief duration.

Though the primary component of the mosquito-repellent incense sticks is neem, other plant-extracts -- medicinal herbs and essential oils obtained from the plants -- are also used. The sticks burn for up to five hours under normal conditions and keep mosquitoes away for up to 6-8 hours, it is claimed, and their smell is not foul. Incense sticks are just one of the several forms of mosquito-repelling formulations cimap plans to introduce, including body lotion, floor-mopping emulsion and fragrant sprays. But, apart from the incense sticks, none of them are being produced commercially.

The two brands of incense sticks available in Lucknow are 'Neem' and 'Classic'. The former is produced by Kashi Vishwanath Herbal Products, while the latter is marketed by Poonam Herbal and Cottage Industries.

cimap is negotiating with another firm based in Jhansi, Madhya Pradesh, to market the product in the western part of the country. The herbal repellents are said to be better than synthetic, chemical-based ones in terms of effectiveness as well as their effect on human health.