The how, why of music therapy 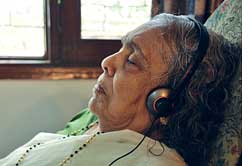 Blood flow, respiration and heartbeat mimic the rhythm of the music

THE Indian film industry spends crores of rupees to make a musical. It has always believed that music can make the heart dance to its beats. These days doctors are taking this approach seriously. Take Rajesh Parthsarthy, for example. He is a general practitioner. He is learning Hindustani classical music because he thinks it will add value to his practice. His patients might soon have to get used to a medical prescription enlisting songs instead of names of pills.

Music has for long been recognized as therapeutic. Slow music is known to relax the cardiovascular system. A new study shows that alternating between fast and slow music can be potentially more effective. Luciano Bernardi of the department of internal medicine at University of Pavia, Italy, found that heartbeat, blood flow and respiration mimic the rhythm and beat of the music being played.

Bernardi's team made 24 people, musicians and non-musicians, listen to music tracks. While they listened to the music, their heartbeat, blood flow and breathing were monitored. Each one's body responded to the tempo of the tracks. For instance, a musical piece with a progressive rise in volume (crescendo) elicited a corresponding rise in heartbeat and blood pressure. Changes were not so drastic for tracks with a uniform tempo. There was a drop in the heartbeat, blood pressure and dilation of blood vessels in the silent pause randomly interjected between music tracks.

Of all the music the listeners heard, the opera pieces established a stronger correlation with them, said the study published on June 30 in Circulation.

The researchers explained the physiological changes as a result of the activation of the subconscious that controls most of the involuntary actions, like respiration, blood flow, heartbeat, contraction and expansion of blood vessels. "Not only emotions can create cardiovascular changes. This study suggests the opposite might be possible; cardiovascular changes may affect emotions," said Bernardi. In other words, the right kind of music can set the right cardiovascular rhythm that could either make you calm or anxious. This could be good news for bradycardia and flutter patients who have irregular heart beats.

The study also found that music has the same effect on everyone, irrespective of individual choices and musical training.

Another study on premature babies showed music helps reduce pain from medical procedures like injections, and encourages oral feeding. Researchers from University of Alberta in Canada published the review in the May issue of Archives of Disease in Childhood.


Quite a few people in the medical world are coming around to accept that music can cure. K K Agarwal, a senior cardiologist at Delhi's Moolchand Hospital, runs an eight-day music therapy. "Different combinations of music have to be used to treat different conditions. To a patient with a heart ailment and a weight problem, I would suggest a combination that would excite and later calm him or her," he said. To make it more effective, said Parthsarthy, music needs to be customized for different disorders.

Not everyone is going tra-la-la. The study was limited to 24 young Caucasians and to popular classical music. One cannot take observations based on such a small sample seriously, said Aashish Contractor, head of the department of preventive cardiology and rehabilitation at Mumbai's Asian Heart Institute. Abhik Majumdar, a music scholar believes music has therapeutic values, but warns against generalizations like raag Malkauns is good for the heart.

Music therapy is also costly. The eight-day therapy at Moolchand hospital costs Rs 10,000. This makes it more of a lifestyle statement for the rich and the busy.