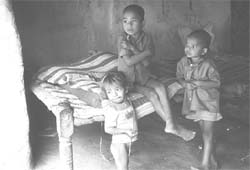 millions of couples the world over often face this question: Is there an ideal period between the birth of the first and second child? It is known in medical circles that having babies too close together can be bad for an infant's health as the mother's body does not get enough time to recover fully from the previous delivery. Too much of a gap between two births can be even worse, as the mother's body is not as prepared as after a previous delivery. Both situations raise the risk that the newborn will be premature or undersized, which can cause long-term health problems, even death.

A space of two-and-a-half years between two births may be ideal for producing healthy, full-term babies, claims a study by the Centers for Disease Control and Prevention ( cdc ) in Atlanta, usa . The researchers found a sound medical basis for what many women are already doing, for altogether different reasons. This study was based on 173,205 births in Utah between 1989 and 1996 ( The New England Journal of Medicine , Vol 340, No 8).

The cdc study calculated that waiting 18-23 months after giving birth to get pregnant again is ideal. "Somehow, the body knows that this interval is good for the health of the infant," says Bao-Ping Zhu, who directed the study. "A delivery is like running for the marathon. You do not want to have two deliveries too close together... otherwise the body will be tired and the birth outcomes are not likely to be good. On the other hand, you do not want to wait too long, either," Zhu points out.

Earlier, the median birth-to-conception interval among the breast-feeding, under-nourished women in the developing countries was approximately three years. Some groups of people have cultural taboos regarding the resumption of sexual intercourse after a birth, and many, if not most, women take conscious actions to avoid conception. The strong cultural and behavioural components of inter-pregnancy intervals in humans make it difficult to determine what a 'natural interval' ought to be.

Women who got pregnant within six months of the previous delivery had a 30-40 per cent greater chance of delivering premature or undersized babies as compared to babies born after the ideal interval. Those who waited 10 years for another child were twice as likely to have an unusually small baby and 50 per cent more likely to deliver prematurely.

Dozens of previous studies have linked short intervals between births with a higher risk of small and premature infants, although none determined the best interval. According to Zhu, babies conceived too soon have problems probably because the mother is recovering from vitamin depletion, blood loss and reproductive system damage from the prior birth -- all while stressed by having to care for a newborn.