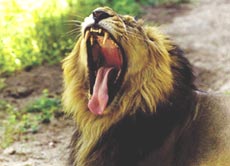 The death of 20 Asiatic lions in a single year (2003-2004) in Gujarat's Gir forests has stirred up a debate in the current session of the state assembly. Ironically, more potent threats to the big cats such as those arising from disease, loss and fragmentation of habitat or inbreeding continue to be overlooked by the state government.

Mangubhai Patel, Gujarat's environment and forest minister, informed the state assembly that 20 Gir lions, including 10 cubs, had died. Of these, apparently only three had died of accidents and the rest of "natural causes".

The semi-arid landscape of Gir national park and the sanctuary in Junagadh and Amreli districts are the last refuges of the Asiatic lion. The latest survey pegs the total population of lions at 327. The population has steadily increased between 1968-1994, from 177 to 284. But researchers say that the increase in numbers is no guarantee of the long-term survival of the Gir lions.

Ravi Chellam, a wildlife biologist who has studied the Gir lions, discloses: "A plan to relocate the lions to Kuno, Madhya Pradesh, had earlier been put into cold storage." The Gujarat government refused to move the lions. The chief wildlife warden, Gujarat, M L Khanna, explains: "The state is still not in favour of translocation. In fact, in February 2004, we declared another satellite location of 1,822 hectares -- home to six-to-eight breeding lions -- a protected area at Mithiyala in Amreli district. So, we are creating new areas for the increasing population."

Chellam says the relocation could stave off chances of the entire population being wiped out at one go. He feels that the mortality rate in itself is not a problem and what is needed is a base studies on causes. Khanna points out cases of cannibalism in the pack. Is the state government going to look beyond the obvious? Or will the lion meet the same fate as the cheetah in India?