Sounds almost like a sci-fi movie, but there is light in the dark for those who have lost their eyesight. A high-tech curing device is on the anvil 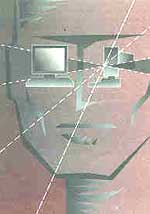 AT LEAST partial eyesight to the blind may be restored, say researchers in the us in a recent study. An artificial vision system with tiny TV cameras in eyeglasses sending invisible laser-borne messages to a computer inside the eye would perform this magic.

The computer, about the size of the date on a rupee coin, floats gently on the thin, wet tissue of the retina, powered by solar cells activated by the laser beam. The computer con- verts visual signals encoded in the laser beam to electrical impulses to be sent to the brain, reporte Associated Press recently.

If that sounds like Z something possible only in science fiction movies, ts Joseph Rizzo, one of its developers, has an answer. He points to the success of the electronic cochlear implant, which is now enabling many deaf people to hear.

The device, which is the first eye-on- a-chip, has just been completed at a cost of us $500,000, Rizzo said. But mass production of the chips should bring the cost down to as low as us $50 each, he added.