Does global warming lead to more malaria in East Africa? 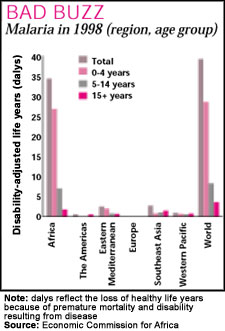 poor people invariably bear the burden of development. A recent study is another testimony to this fact. It indicates global warming has led to more malaria in East Africa -- in any case, one of the world's worst hit regions.

The study -- Regional warming and malaria resurgence -- was conducted by researchers from the us-based Johns Hopkins Bloomberg School of Public Health, the Tyndall Centre for Climate Change Research at the University of East Anglia, UK, and the Earth Institute at Columbia University.

The new findings challenge a previous study conducted by researchers from the University of Oxford, uk. That study had found "no significant changes" in the long-term climate of the region; therefore, it suggested, the upsurge was due to drug-resistance and population growth, not global warming.

In the new research the scientists say that temperatures have increased by 0.15C per decade from 1970 to 1998 in most regions of East Africa. And, it may not be mere coincidence that the rise in malaria parallels the warming trends. "We're not trying to say we have convincing and conclusive proof that climate change is causing malaria but we don't agree with the previous study," says Mike Hulme, a climatologist at the University of East Anglia. "We want to keep the door open that climate change might be causing increase in malaria incidences." Asserts study co-author Jonathan Patz, "At the moment we can't rule it out."

The researchers say data used in the previous study was not precise. The climate of one area was correlated with disease incidences of another area not located at the same altitude. They argue this approach crucially ignored temperature variability, particularly essential in a place of such large altitudinal contrasts. "The climate dataset used is not designed to reveal climate trends for specific locations. It may be appropriate to draw conclusions about Africa in general, but not for area-specific judgements," explains Hulme. Adds Patz, "Weather data is particularly sparse in East Africa. The climate database used was originally created to pool information for analysis over large geographic areas. There is potential, therefore, for deriving spurious conclusions."

In the latest study conducted at four sites in the African highlands, a rise in the magnitude or frequency of malaria epidemics was closely associated with short-term climate variance. After comparing monthly climate and malaria data in highland Kakamega, Kenya, researchers found a strong link between malaria transmission and monthly maximum temperature variance. Increased temperatures may have extended the transmission season; therefore people were exposed for longer periods to the malaria parasite.

The researchers contend a reliable assessment of long-term relationships between climate and malaria incidence is required. This means local monitoring of climate and disease variables. "Links between processes as diverse as climate and human disease require researchers from different fields to work together to best assess health implications of long-term past climate trends or future climate change," says Patz.

Malaria kills between 1-2.7 million people, most being children in Africa. Although anti-malaria drugs are available, the parasite has developed resistance to many treatments. Mosquitoes , too, are resistant to some pesticides. So finding a vaccine is a top public health priority. Scientists believe the sequencing of the genetic maps of the malaria parasite and its host will speed up development of new treatments.