You never thought it could happen. For the first time, geneticists have combined genes from different species 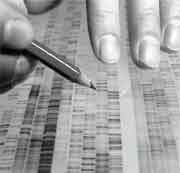 it was an experiment right out of science fiction: scientists taking different species, extracting their genetic sequences and then combining these to get a new sequence that promises some amazing powers. However, before telling you how they did it, some background information is essential. Evolution, through sexual reproduction, enables new combinations of genes to arise via shuffling of the dna sequences derived from each parent, a feature that is unique in itself. This process, known as recombination, puts together bits from two similar-but-not-exactly-identical pre-existing genes from each parent and creates a brand new one. The number of variations possible in the gene produced by this process is mind boggling. Recombination also has the possibility of constant improvement through natural experimentation.

However, scope for such "improvement" is restricted to the dna sequences, which can be exchanged only between members of the same species.

But then experts began arguing that perhaps, it is possible achieve greater improvement by recombining similar dna sequences taken from different species. Usually there is no way find out how true this is, since members of different species do not mate with each another.

However, this restriction can be easily done away with in a test-tube scenario: scientists just put different dna sequences together, throws in some enzymes whose function is to cut and then rejoin the dna s; and if these cuts occur reasonably at random, combinations between dna sequences from widely differing species can be produced. This is exactly what A Crameri and his colleagues of the Maxygen Corporation in California, usa tried to do in a recent experiment of theirs ( Nature, Vol 391, No 6665).

dna sequences encoding a protein that creates resistance to moxalactam, an antibiotic, were chosen from four bacterial species: Citrobacter freundii , Enterobacter cloacae , Klebsiella pneumoniae and Yersinia enterocolitica . The four genes, 58 per cent to 82 per cent identical at the dna sequence level, were stuffed either individually or as a pool. And the resultant recombined sequences of dna were used to transform the standard laboratory bacterium, Escherichia coli , which was then tested for its capacity to grow in an environment containing a certain amount of Moxalactam. Scientists figured that if they needed a higher concentration of moxalactam to stop Escherichia coli 's from growing further, then this would mean that the newly generated dna sequence was indeed stronger and more resistant to the antibiotic.

The new recombinant dna sequences derived from genes pooled from a single species showed up to an eight fold improvement compared to the starting dna . In contrast, "family shuffling" improved antibiotic resistance by 270-540 fold. Thus "family shuffling" is definitely better than conventional recombination by 34-68 fold, at any rate under these conditions.

What was the nature of these new, dramatically improved, dna sequences? On sequencing, the two best turned out to be made up of eight distinct segments derived from three species. The junctions of these segments were derived from regions in which pairs of dna sequences had short stretches in common. In addition, the newly generated dna sequences had a large number of mutations that resulting from mistakes during the copying process.

The results of this experiment show, as the researchers point out, that "molecular breeding" can operate within far more flexible constraints than conventional animal or plant breeding, which is restricted to members of the same species. The possibilities for genetic improvement that are opened up are amazing. But a word of caution: these methods are not very likely to yield novel species (as opposed to novel mole cules), because that would demand the simultaneous selection of a very large number of different dna sequences.