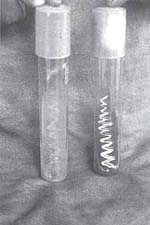 THREE teams of scientists at the University of Delhi South Campus have identified fungi, algae and bacteria that are natural extractors of metals washed out in mine effluents.

Sheela Srivastava, a microbial geneticist at the university, says these microorganisms can be exposed to the polluted water and left to gobble up metals as they are wont to. The metals can then be extracted from the bugs using powerful solvents like hydrochloric acid. The technique works out to be cheap, she adds.

Srivastava's team has identified bacteria of the Pseudomonas family that can accumulate both zinc and copper. In trials at the Khetri Copper Complex in Rajasthan, they found that one strain of Pseudomonas can remove between 70 and 90 per cent of the zinc and copper in the effluents. Another strain can remove zinc from low-grade ores. Srivastava says whole colonies of some bacteria that accumulate copper turn blue in presence of a copper-rich effluent. The team is designing a bioreactor to extract metals from mine effluents. It says the bioreactor will be economical, handy and reusable. The team is also trying to understand the genetic basis of the ability of microorganisms to resist the poisonous effects of metals.

R K Saxena, another microbiologist at the university, and his colleagues have discovered that certain fungi like Trichoderma and Aspergillus can collect copper, cobalt and nickel in their thread-like bodies. Many of these fungal strains have the ability to degrade cellulose - a major carbohydrate component of plants - and the scientists claim they can be employed to break down organic waste as well as clean up metals.

Microbiologist Rani Gupta and her colleagues have identified certain strains of blue green algae - Plectonema and 0scillatoria - which can absorb zinc. The algae photosynthesise their food and so are cheap to grow.