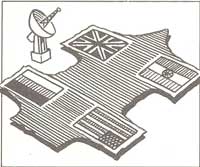 The Union government's department of science and technology (DST) and the Madras-based Central Leather Research Institute (CLRI) held a show to demonstrate the country's skills and capabilities in leather processing technologies. The planned highlight was a 9-hour satellite-linked, video conference of leather producers and technologists from India, the United States, the United Kingdom and Germany.

However, the conference turned out to be a fiasco. The engineers of the Videsh Sanchar Nigam Ltd (VSNL), the overseas communications agency, tinkered with their equipment for a couple of hours and announced they could not establish the satellite link.

The general impression of the fuming Indian leather experts was summed by up a delegate representing one of India's largest tanneries, the Super Tannery of Kanpur, who said: "Until recently, Western importers thought though the quality of our leather goods was quite good, we could not keep delivery schedules. Now, they are going to think we cannot even communicate."

In similar vein, CLRI director G Thyagarajan said the initiative of his institute in promoting Indian leather exports was totally wasted because of "the utter inefficiency of VSNL." Thyagarajan said CLRI and DST had finalised the agreement with VSNL for the conference in August 1993 and had been assured by the latter about its success. In no mood to excuse the errant telecom body, Thyagarajan said, "We are going to sue VSNL and make them pay compensation for damages."

VSNL officials were extremely reticent about their failure. "We are investigating," was the only comment of VSNL deputy general manager K K Khetrapal.