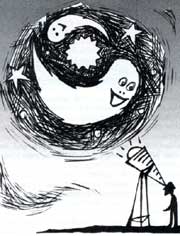 THE Hubble space telescope has continued to puzzle astronomers ever since it soared off, by sending one intriguing information after another. The latest images from the telescope suggest that the Milky Way and other neighbouring galaxies are filled with 'rogue' planets, which were never observed before. These planets have escaped the gravitational pull of their parent stars and have irregular orbits.

The objects, typically resembling tadpoles, have glowing heads and streaming tails and all revolve around a sunlike star in the Helix nebula in the constellation Aquarius, about 450 light - years away from us. The astronomers call these objects the "cometary knots," as they closely resemble comets. Each knot is about 16 billion km in diameter and has a tail stretching almost to a length of 160 billion km. The matter content of each knot, however, is so rarefied that, if compressed into a lump, a knot would be hardly twice as massive as the earth.

First observed by astronomers Robert 0' Dell and Kerry p Handron of Rice University, Texas, us, the newly found knots were also subsequently reported by Rudolph E Schild of the Harvard Smithsonian Centre for Astrophysics. They used different techniques and their papers in the April issue of The Astronomical Journal claim that the new Hubble data provides unprecedented information on the number, mass structure and distribution of the tadpoles. The astronomers detected 313 such knots and used computer simulation studies to conclude that the total number might be around 3,500.

The tadpoles formed, O'Dell opines, when an unsettled star ejected gas into space at supersonic speeds. These gases initially could not escape the gravitational pull of the parent star and formed a series of concentric shells around it. Sometime, a fast moving layer may have c;ollided with a slower one and the instability that resulted, caused the gases to swirl together and clump into smaller, denser knots almost like a "cumulus cloud forming in the sky".

Astronomers, however, are divide in their opinion as to what awaits these cometary knots. The standard prediction is that the knots will eventually dissipate, becoming part of the interstellar dust from which new stars originate. O'Dell, however, believes that over a few thousand years to come, the tadpoles will continue shrinking and together snowball into planet -sized bodies of icy dust. This theory is endorsed by the fact that the knots further away from the sun are smaller than the closer ones. Each convulsing star could bring forth thousands of such knots. Astronomers know that roughly one star dies in a galaxy per year, and if each dying star adds thousands such lumps over a billion years, the Milky Way must be having trillions of these 'rogue planets'. "Our galaxy must be populated with bodies that we simply don't see", says O'Dell.

The current instruments, moreover, are unable to probe such objects at distances much greater than the Helix nebula. A vast hidden population of such knots could account for at least a part of the 'missing mass' in the universe -a conundrum that the astronomers are still busy trying to figure out. Based on gravitational forces implied by the motion of the galaxies and clusters, astronomers conclude that there must be 10 times the matter they have so far detected in the cosmos.

O'Dell's view is ratified by Schild's observation of such knots in a galaxy far away. Schild has used a technique called 'gravitational lensing' to observe such structures in the direction of the Ursa Major (the Great Bear). As the Hubble continues its search for such cometary knots around other dying stars, astronomers revel in the expectations of new data to come.