The increasing fear of losing jobs to cheaper Mexican labour has prompted many Americans to protest the North American Free Trade Agreement. 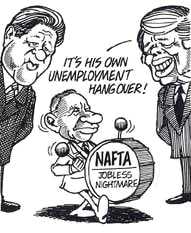 THE GROWING fear of losing jobs has fuelled the debate on the North American Free Trade Agreement (NAFTA). Among the major opponents to the pact between the US, Canada and Mexico, are Ross Perot, a contender for the US President's post in 1992, the American Federation of Labour-Confederation of Industrial Organisations (AFL-CIO) -- the largest trade union organisation in the US -- and David Bonior -- the Democrat chief whip in the House of Representatives.

In a book titled Save Your Job, Save Our Country: Why NAFTA Must Be Stopped -- Now!, Perot launches a no-holds-barred attack on the agreement. The book quotes Lynn Martin, who was labour secretary in 1992, as admitting the accord will entail the loss of an estimated 100,000 to 180,000 American jobs because production facilities will shift to Mexico, where average labour wages are not even one-tenth that in the US.


The 150-page book says NAFTA will hurt US trucking, real estate, communications, construction, banking and automobile industries as well as the domestic agricultural sector. Perot highlights the low wages and tame unions that will attract US executives into moving production across the border.

Perot is supported in his fight by labour unions, who feel so strongly about the pact that not a single major union has broken away from the anti-accord movement. An AFL-CIO official said, "We'll bring the roof down on our heads over this issue." He was supported by Frank Garrison, AFL-CIO leader in Michigan, who said, "I think this administration is making a major tactical error. We owe it to the President to defeat it."

On September 13, AFL-CIO, Sierra Club -- an environmental pressure group -- and Bonior called a joint press conference to denounce the pact. "NAFTA is fundamentally flawed because it will make our jobs the number one export for this country," said Bonior at the press conference.

It was Sierra Club, along with the Friends of the Earth and Public Citizen, which filed the first environmental impact suit to block the pact (Down To Earth, August 15, 1993).

Meanwhile, in Mexico, fears of environmental damage have fuelled a flurry of activity. Since the NAFTA fast-track debate of 1991, Mexican President Carlos Salinas de Gortari has poured $500 million into environmental programmes on the border, established an office of environmental attorney general to prosecute both domestic and foreign industries, revamped national environmental standards and implemented emergency regulations to tighten air standards.

According to reports, so effective were the measures, the mayor of Ciudad Juarez, close to the Texas border, recently lodged a good-humoured complaint with Salinas that one of his cars could not pass an emissions test even after four attempts. The Mexican government has conducted more than 11,000 environmental inspections in the last two years and has partly or fully closed several hundred facilities at a cost of 6,000 jobs.

Besides, the environmental side-agreement Clinton signed with Canada and Mexico, which had been strengthened to assuage environmental concerns, will prevent the creation of pollution havens at the borders, say his supporters.


The Clinton camp also discounts fears of loss of jobs. US trade representative Mickey Kantor said Perot's book contained 193 false or misleading statements. And, former US President Jimmy Carter said of Perot: "Unfortunately, we have in this country a demagogue who has unlimited resources and who is extremely careless with the truth and who is preying on the fears and uncertainties of the American public."

Clinton rejected fears of impending job losses and said that on the contrary, the pact will create 200,000 new jobs in the first two years and one million jobs over 10 years, although this will be offset by some losses. According to the Congressional budget office, only 500,000 jobs will be lost because of NAFTA over the next decade.