The other side of nitrogen

Excess of any thing is bad, and nitrogen is no exception. The benevolent gas is actually responsible for immense ecological damage 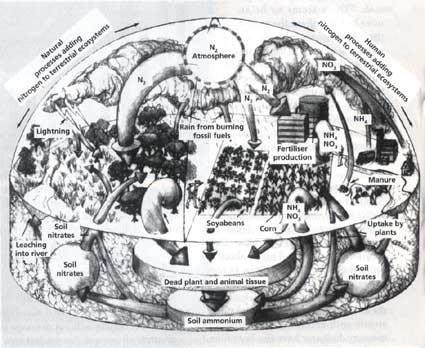 it is, in fact, nitrogen's extraordinary usefulness to life which is at the heart of the damage it can cause. It ranks fourth as the most common chemical in living tissues, after oxygen, carbon and hydrogen. It is important for plant nutrition, and thus for animal life as well. It is an essential input as fertiliser in modern agriculture. However, nitrogen also has the dubious distinction of being environmentally hazardous. Carbon dioxide emitted by burning of fossil fuels can warm the Earth's atmosphere; human-made chemicals like chlorofluorocarbons can damage the Earth's ozone layer. But nitrogen alone is capable of doing all this to some extent. David Schimel of the National Centre for Atmospheric Research in Boulder, Colorado, us, says that while more nitrogen might be beneficial initially, in the long term it creates imbalances in the bio-geochemical cycles.

Scientists estimate that natural processes (like nitrogen-fixing bacteria in leguminous plants and lightening) add 88.5 to 147.6 million tonnes (mt) of excess nitrogen a year to the soil. Of this, crops like peas and beans which fix nitrogen with the help of their own bacteria account for 30.6 to 52 mt of nitrogen.

Human activities are adding about 129.8 to 150.5 mt. Of this the burning of fossil fuels like coal and oil by power plants, factories and vehicles adds about 20 mt of nitrogen to the atmosphere, 70 mt is released by burning of forests and grasslands, 78.8 mt is accounted for by manufactured fertiliser.

All this excess nitrogen emitted into the atmosphere ends up in creeks, estuaries and rivers flowing into the continental shelf. Excess nitrogen results in oxygen deprivation, toxic algal blooms and biological degradation in coastal waters and estuaries where commercial fishes breed. Nitrogen in the form of nitrous oxide is a potential greenhouse gas and a destroyer of stratospheric ozone. It also contributes to smog and acid rain.

Excess nitrogen promotes the growth of microscopic plants that form the base of the aquatic food chain. While they live, these organisms cloud the water resulting in shutting off the supply of sunlight to larger aquatic plants. When they die, they are consumed by bacteria, which proliferate and drain oxygen from the water. David A Wedin, of the University of Toronto, Canada, and David Tilman of the University of Minnesota, us, observe that excess nitrogen results, firstly, in the net loss of biological diversity, with weedy species of grass becoming dominant and the ecosystem as a whole becoming biologically poorer. Secondly, when these newly dominant species die and decompose, their higher nitrogen content allows more nitrates to leak into the soil. Since nitrate is highly soluble, it seeps through the soil into the groundwater and surface runoff. This, the scientists say, could contribute to harmful blooms of algae and impair water quality. High nitrate levels in aquifers would make the drinking water toxic.

It is estimated that the pace of nitrogen build-up is likely to accelerate. In such a case, scientists fear that many ecosystems would become saturated with nitrogen, increasing environmental damage.