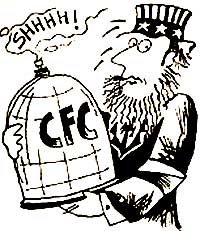 EFFORTS to abolish the use of chlorofluorocarbons (CFCs) in developing countries, has received a jolt: evidence of a thriving black market for CFCs has been detected recently in the US.

The chemical, which is wreaking havoc on the earth's fragile ozone layer, is used primarily in air-conditioning and refrigeration industries. It has been banned from production in the developed nations from this year under the 1987 Montreal Protocol. Developing countries are, however, allowed to produce CFCs till AD 2010. And it is from these countries that CFC-12, popularly known as Freon, is being smuggled into .the us. As much as 30 per cent of the continuing, although shrinking, us market for the chemical is now being met by smuggled CFCs.

IThe illegal import of the chemical could send up in smoke the efforts of containing the damage 'to the ozone layer, which is mostly human-made, as was recently acknowledged by the intergovernmental Panel on Climate Change at its annual meeting at Rome held in December 1995. The smuggling has led to another setback: companies producing alternatives to CFCs have been hurt to a large extent. As it is, the production of alternatives took a longer time than expected, furthering the cause of illegal CFC imports.

Reportedly, cylinders Of CFC-12, which have been manufactured in countries where it is still allowed, have entered us shores sporting labels of recycled material, or have sneake "d into the distribution line while ostensibly being shipped to other countries, according to law enforcement officials in the us.

In a bid to reduce market dependency on CFCs, a progressively higher excise tax was imposed. on all CFCs imported to the us, as production was being phased out last year. The move was part of the internationally agreed plan to force the use of more alternatives by automobile and refrigerator manufacturers.

Companies which have invested heavily in alternatives are rightly sore about these developments. Says Paul Dugard, regulatory affairs manager for ici Americas Inc, which has invested more than us $500 million in the search for alternatives, - that "a number of people are not seeing the return on investment". DuPont's environmental manager Tony Vogelsberg adds that his company has also invested about us $500 million for producing substitutes for CFCs, and estimates the total expenditures on alternatives by chemical, air-conditioning and automobile companies at several billion dollars.

Environmentalists also express fear that smuggled CFCs are contaminated. As they contain high amounts, of moisture and contaminants, they could cause air -conditioners and refrigerators to break down. Further, the illegal shipments Of CFC- 12 could delay efforts to phase out its use, which puts our earth at an increased risk of damage from the depletion of the ozone layer.

Ozone damage is hardly perceived as a threat in the Northern hemisphere. However, according to Jerry MahIman, director, National Oceanic and Atmospheric Administration, Princeton University, us, and John Passacantando of the environmental group Ozone Action, global warming could change this view.