Only 15 per cent of drugs are degraded by sewage plants 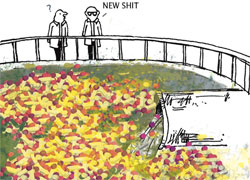 WHILE waste from drug factories continues to be a major concern for the environment, not much attention is paid to pollution that results from household consumption of drugs. Very few models exist to trace the trajectory of drugs and determine their fate.

Now scientists from Autonomous University of Barcelona in Spain have devised a mathematical model which will help trace the breakdown of drugs after their treatment in sewage plants following consumption by people.

In the past untreated pharmaceutical waste from households has been found in groundwater. Prozac, an anti-depressant, was found in UK’s drinking water in 2004. Low levels of carabamazepine, an anti-convulsant, and estrone, a naturally occurring estrogen, were found in US drinking water between 2006 and 2007. A 2010 study by Rey Juan Carlos University in Spain had found high residues of anti-depressants, like fluoxetine and carabamazepine in rivers in Madrid metropolitan area.

The Spanish team studied 38 commonly used drugs in Spain, including ibuprofen (pain killer), ciprofloxacin (antibiotic), paracetamol (anti-pyretic) and ranitidine (antacid). They analysed the consumption of these drugs between 1999 and 2006. The team integrated data on concentrations of the drugs when they enter the sewage plants and information on their physico-chemical behaviour during the treatment process, such as how the drug gets attached to sludge and its biodegradability. Using a mathematical equation, they then calculated the concentrations leaving the sewage plant.

They found only 10 to 15 per cent of drugs like clarithomycine, erythromycine and roxithromicine are removed during waste treatment because of their low biodegradability. Clarithomycine achieves a higher concentration in water though its rate of consumption is not high. “This relatively elevated concentration in water and also in the solid phase compartments can be ascribed to its low biodegradation constant,” the team wrote. Concentrations of erythromycine and ranitidine, for which the rate of consumption is high, were found to be considerably low, it adds.

The model will help find where drugs end up because they are not completely metabolised in the body. The concentrations were high enough to harm the environment, the team notes. To test the accuracy of their findings, the team compared its result with the other studies that have analysed pollution in rivers and lakes. They matched. The study was published in the July 2011 issue of Water Air and Soil Pollution.

Commenting on the model, Swedish scientist Joakim Larsson, who recently found that antibiotics in Indian rivers were making bacteria resistant, says, “They do not compare their model with other existing models, thus we do not know how much better (or worse) it is.” On whether this would work in India, he notes, “There is a need for actual environmental monitoring to identify hotspots of concern.”