The power of intermediaries 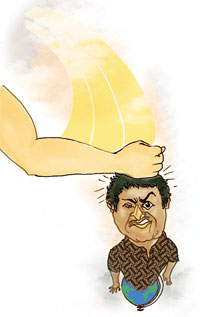 WHEN Rajya Sabha member from Kerala P Rajeeve of CPM moved an unprecedented motion to annul the Information Technology (Intermediaries Guidelines) Rules, 2011, he did not really expect a rollback of the laws. As he told Down To Earth in the days preceding the discussion in the Upper House, it was the only way to have a parliamentary discussion of rules which are the prerogative of the executive. “Had the minister concerned (Kapil Sibal, Communications and Information Technology) given assurance on revisiting the rules it would have served the purpose,” the MP had conceded.

On May 17 this did happen. Following a two-hour debate, the annulment motion was rejected after Sibal agreed to call a meeting of MPs who had objections along with all stakeholders to discuss the contested rules. He promised that whatever consensus emerged would be implemented by the government. Rajeeve’s contention is that the IT (information technology) rules are a violation of right to freedom of speech besides going against the laws of natural justice. “The rules are ultra vires of the parent IT Act,” he says.

The rules have been vexatious since they were notified in April 2011. Critics said they were leading to censorship of the Internet in a far from transparent manner because the new rules forced the intermediaries to regulate content and thus play censor. Intermediaries as defined in the IT Act of 2000, include a broad range of players from Internet service providers (ISPs) such as MTNL and Reliance to search engines like Google and Yahoo!, auction sites, blogging platforms and cyber cafes. The rules specify a broad list of unlawful content: information that is grossly harmful, blasphemous, obscene, encourages money laundering or is unlawful in any other manner.

This has allowed content to be interpreted subjectively since many of the categories, such as blasphemous or hateful, have not been defined. Worse, the content has to be removed within 36 hours after a complaint is received. As a result, intermediaries have played safe by complying with complaints without due diligence, allowing private and government censorship full play. While a prickly government has been removing content critical of its policies and action, film production firms have made a habit of getting John Doe orders—a court injunction issued against unknown offenders—and forcing ISPs to shut down parts of the Internet to combat movie piracy. These include file-sharing sites to blogging platforms, not all of whom could be accused of illegal activity. A major shutdown coincided with the Rajya Sabha debate.

The extent of censorship exercised by intermediaries was brought out by the Centre for Internet & Society of Bengaluru, which undertook a sting operation to expose the 2011 rules. It sent fraudulent “take-down notices” to several ISPs and found these companies shut down blogs and websites without bothering to check the veracity of the complaints. Programme manager Pranesh Prakash pointed out that six of the seven intermediaries to whom notices had been sent removed content, including search results listings “on the basis of frivolous complaints”.

The new order of censorship is such that concerned people are not informed about the take-down or given a chance to defend themselves.

Analysts say the major flaws are lack of transparency, a proper reporting process and safeguards related to a put back mechanism. However, an effective and balanced reframing of the IT rules will come about only if more parliamentarians are convinced that Net freedom is at stake.

At an early May meeting organised by the Software Freedom Law Center, a representative gathering of politicians from mainstream parties, including CPM, were divided on the question of freedom of speech and the right to privacy being curtailed by the rules. Many of them spoke about the difficulty of balancing rights with the need to control harmful content. Sibal is well aware of this.
Annulment Motion Technology Internet Information India Governance And … Governance And … Internet censorship IT Act Rules Kapil Sibal P Rajeeve Rajya Sabha Software Freedom Law … News News News
Donate Now