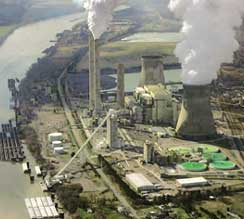 In a loss of face for the Bush administration, nine us states have decided to introduce mandatory greenhouse gas emission controls in the country's first-of-its-kind regional agreement. Connecticut, Delaware, Maine, Massachusetts, New Hampshire, New Jersey, New York, Rhode Island and Vermont seek to freeze carbon dioxide emissions from big power plants by 2009 and reduce them by 10 per cent by 2020. The us has consistently opposed the Kyoto Protocol (kp), the global treaty to fight climate change, on the ground that emission reduction targets, like the ones set by these states, would devastate its economy. But with increasing evidences of global warming coming to light, internal dissent against Bush administration's climate change policy has also increased. Earlier this year, the mayors of over 130 us cities decided to meet kp's emission reduction targets.

New York Times published the outline of the states' draft agreement on August 24, 2005. Dale Bryk, a lawyer at the Natural Resources Defence Council, who has monitored the pact's progress, says it is "a done deal". "They plan to have a memorandum of understanding by September end...It's huge...It's going to take the argument off the table [that] we can't do this because it's too expensive, there are too many obstacles." Pennsylvania and Maryland are considering joining the pact, while California, Oregon, Washington, New Mexico and Arizona want to formulate similar agreements.