Madhya Pradesh took a head-start in implementing the 3-tier panchayati raj. But lack of finances might just undo the transfer of power to the people 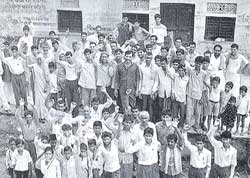 UNTIL recently, Virender Singh and Churawan Lal were leading ordinary lives in obscure villages in Madhya Pradesh. On August 20, a change came their way and subjects became rulers. Both were formally endowed with powers under the Madhya Pradesh Panchayati Raj Act, 1993. Singh of Behat in Gwalior district and Lal of Navagaon in Raipur district became sarpanches (village leaders).

The response to panchayat power has been generally positive. State chief minister Digvijay Singh says, "The mood in the state is upbeat. The system will certainly introduce a greater degree of accountability among policy makers and those who implement them."

Says S C Jain, principal secretary of the rural development department, "The people are elated. They can plan independently for their future. It is a feeling of being unfettered."

Umendra Ram Verma, sarpanch of Parsada village in Raipur, agrees: "Previously, we could not oppose official plans if they went against our needs. Now, if our elected panchayat members do something wrong, their decision can be overturned." Says Devnath Usandi, sarpanch of Bijli village in Bastar district, "Under panchayati raj, priority can be given to literacy and roads. These are important for backward regions like the interior villages of Bastar, which become virtually inaccessible during the monsoon."

Says Congress MP Mani Shankar Aiyar, "Earlier, the local bodies were puppets and were dismissed at will. Panchayati raj is irreversible and nothing can overturn it."

Though the introduction of panchayati raj has raised great expectations, some villagers are circumspect. As Kanti Sahu, a janpad member of Abhanpur block in Raipur, puts it, "Woh kehte hain kheer banani hain. Magar jab woh kheer ka samaan denge, tabhi pata chalega kheer kaisi bani (They say that porridge has to be made. But only when we get the ingredients will we know how it turns out)." Even so, Sahu says women's welfare, rural development and campaigns against alcoholism and gambling will benefit.
Singh and Lal, among others, have not been overwhelmed by euphoria. Singh regularly tours the villages, making notes of people's aspirations in a small diary. Lal has already convened 3 meetings of the panchayat and has set an agenda for development work.

The new-found confidence of self-rule came out strongly at a meeting attended by more than 300 sarpanches in Bhopal early August. They drew up an 11-point charter of resolutions, including demands to resolve land disputes of poor villages; tackle the growing dacoity menace in Morena district; impartially survey forest land; end the establishment of liquor vends; stop the exploitation of bidi workers in Bundelkhand, and increase employment opportunities in Chattisgarh to reverse the exodus out of villages.

The panchayats, which have a 5-year term, have been invested with a range of powers and duties. Says Digvijay Singh, "We wanted to create district-level governments, making the lowest body the strongest. And that is why all the developmental work, fiscal management, policy-making, implementation, improvement of living standards and uplift of sections of society have been entrusted to the panchayats."

The tasks of the panchayats (see box) include stemming environmental degradation. They can carve out policies for afforestation, forest conservation, animal protection and watershed management. Says Digvijay Singh, "A state-level panel to work on 380 watershed management schemes has been created. It consists of prominent environmentalists like Anna Hazare and Hanumantha Rao."

Apart from functional freedom, the panchayats also have -- or are about to have -- fiscal independence. Says state finance minister Arun Mushran, "The government, realising the need for panchayats to be fiscally autonomous, constituted a finance commission to prepare a funding structure for them. The commission is to submit its report within a year."

Says Jain, "Other stopgap arrangements have been made to ensure that the panchayats have resources. For example, land revenue collected in a gram panchayat area will be at its disposal. Tanks will also be in the charge of the local bodies, which can levy a cess on water and electricity. A percentage of stamp duty collected by the districts will be distributed to the panchayats after being collected in a consolidated fund."

The panchayats are empowered to augment their funds through internal resource generation. Virender Singh, for example, has decided that his village has the potential for developing a large market. Lal feels the sale of quarried stones can be a major source of revenue, especially in the Chattisgarh region. Besides, the panchayats will continue getting finances under the state and Union government-funded Jawahar Rozgar Yojna (jry) and the Indira Awas Yojna (iay) schemes.


However, in tribal areas like Abujhmad in Bastar, panchayati raj is not expected to break much new ground because of traditional lifestyles. Nonetheless, janpad member Santu Ram from Orcha village says, "The government money will come to us and we will know how much money is available. Earlier, we never knew how much funds were actually available."

The opposition claims that in endeavouring to promote panchayati raj, the state government has tried to achieve too much too soon. B L Patidar, assembly deputy speaker and panchayati raj minister in the former Bharatiya Janata Party government, claims, "The people were not prepared -- this is why several seats went without nominations and people were elected unopposed. The elections were politicised covertly. Then, there are functional problems. The gram sabhas have not been vested with much powers, making the devolution incomplete."

The financial autonomy of the panchayats, for what it is worth, is precisely the aspect that has drawn the most flak. Observers feel that once the villagers realise they have been handed onerous responsibilities without adequate resources, the euphoria of self-rule in the villages will ebb. Says Aiyar, "The finance commission has been set up without broad parameters. Too much has been left to the state government, which could lead to chaotic and anomalous situations."

Patidar says the interim financial measures are woefully inadequate. "The total land revenue collected at the state level every year," he says, "never exceeds Rs 30 crore. And JRY money to the largest panchayat hardly exceeds Rs 40,000 per year. There is no money with the panchayats. Because of this, 22,000 teachers for the literacy programme will be appointed on an ad hoc basis for 5 years on a minimum monthly wage of Rs 863." Comments Mohan Singh Rathore, president of Ghati Gaon zilla panchayat, "If this is the destiny of teachers, panchayati raj has no future because its survival depends on literacy."

Opposition leader Vikram Verma says, "Of 30,922 panchayats, more than 20,000 do not have even an office. With this fiscal framework, the panchayats will simply not be able to function." Patidar claims many elected representatives have defaulted on loan repayments and will hardly be in a position to enforce penalties.

However, Digvijay Singh contends, "This is just the beginning. The financial problems will be dealt with after the finance commission submits its report."

Critics have also targeted other aspects of panchayati raj. One casualty is the bureaucracy: collectors who were the undisputed kings of the districts have been reduced to advising zilla panchayat presidents. Said one collector, "The institution of the collector is being harmed." The role of the bureaucracy has not been defined clearly, creating confusion. For instance, though block development officers have been sent back to their parent cadres, they have also been made project officers in the panchayats.

Some neutral activists and ngos say they had to join the election process. As Gautam Banerjee of Ekta Parishad, an ngo, says, "We could not afford to sit on the fence. If we had boycotted the polls, unwanted elements would have been elected. We participated in order to at least attempt to establish an alternative socio-political system."

Shashi Sail, president of the Chattisgarh Mahila Jagriti Sanghatan (cmjs), explains, "Though we are aware that the state government is trying to withdraw from fulfilling its obligations by placing the onus on the panchayats, we still view it as the last democratic space available for people to assert themselves. This space can be utilised to struggle for more space."

The reservation of one-third of the seats at all levels for women, too, has been flayed. The major contention is that most elected women are proxies for male relatives who were not allowed to contest.

In Navagaon, deputy sarpanch Ashwati says nothing without the permission of her husband Devjan, a Congress worker. Devjan unashamedly asserts, "If anything requires a signature, I will first go through it. She has the rights, but she will use them on my instructions."


Though the polls were not party-based, victorious candidates were wooed assiduously by the Congress and the Bharatiya Janata Party. In the janpads and zilla panchayats, the stakes were higher and there was a higher degree of politicking. Ultimately, the established power brokers secured control of these tiers.

Digvijay Singh claimed there was "no politicisation at the gram panchayat level" but admitted it was "restricted to the district and block levels." Nonetheless, he said, "panchayati raj is all about self-evolution. Things will improve as people learn to govern themselves."

Digvijay Singh's optimism of panchayats being quite capable of handling village affairs is not shared by everyone. There are those who contend that most sarpanches either have no experience of panchayat administration or are not literate.

Countering the argument, Jain says, "A detailed training programme will be held for all panchayat members. The training will include sessions on panchayats, their rights and duties, motivation and community development. Agencies like the Indian Institute of Public Administration in Delhi, the Institute of Rural Management in Anand and several ngos are drawing up the programme."

But panchayati raj has gone down well with some people. Says Ram Chandra Bhargava, secretary of the Bhopal-based ngo Gandhi Bhawan Nyas, "Villages should be able to talk about their own welfare and resolve their crises. If the people are determined, they can intervene and use the panchayats to ask for the powers that the Constitution and the government have declared for them."

Rameshwar Lal Nirmalkar, a sarpanch of Birbhira in Raipur, says, "We have little information on the exact extent of our rights, but we will strive to see that out rights are not denied."

Santu Ram, in fact, is campaigning to bring tribals more in tune with the mainstream, from which they have been virtually excluded. "They have cut us off from the external world. Now we will start governing ourselves and try to progress," Ram says optimistically. The state government, meanwhile, is debating whether to maintain tribal ethos, develop tribal areas or attempt a mix of both.

Women like Kanti Sahu plan to spread consciousness among women panches. Sahu says that regardless of political affiliation, all women panches in the Raipur area will be given the chance to attend an orientation course by the cmjs. And, as Shashi Sail puts it, "Though by and large the elected women cannot be called leaders, their involvement in the process will create a new awareness."

In addition, the sarpanches at their sammelan resolved to commence a Panchayati Raj Jan Chetna Abhiyan in October to campaign for awareness and ensure appropriate people's participation in governance.

Ultimately, the fact that panchayati raj has been introduced is itself an accomplishment.