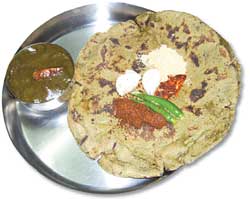 Five years after I started living in Vidarbha, I coined my first adage about the region’s cooking: one can’t add too much sugar to tea or chilly to curries. And I was not wrong. There are usually two types of vegetable preparations—mokli bhaji or fried vegetables and rassa bhaji or vegetable curry.

Both are fiery spicy, too oily and prepared almost in the same way. Even the non-vegetarian recipes are no different from the vegetarian. Desserts like kheer and halwa are cloyingly sweet.

The cuisine of the rugged Maharashtra region lacked both in variety and subtlety to my Bengali-cosmopolitan taste, accustomed to endless creativity through combinations of spices and to a vast array of scrumptious vegetable and fish preparations. I could not appreciate the region’s culinary art. It took me another five years to notice an array of subtly-flavoured dry chutney powder made from oilseeds and lentils; it is a must in every platter served. But then chutneys are just fringe foods.

It was only after 20 years of wandering in the hinterlands, getting caught in the oddest of places and surviving on the bounty of the poorest that I grasped the charm of Vidarbha’s food—it lies in its bread, not in the accompaniments. I had come across Maharashtra’s festive bread—pooran poli—when I started living in Nagpur, but promptly learnt to hate it. Later, after my marriage, when my mother-in-law wanted me to learn how to make pooran poli, I put my foot down. The sweet delicacy is a fried chapati made from maida (refined wheat flour) and usually stuffed with chickpea paste and sugar. That was the biggest blow to her hopes of ever moulding me into a presentable daughter- in-law; after all, a Marathi bahu must know how to make pooran poli.

We found common ground by accident. During a visit to the hilly Melghat region in 2006 my jeep tyre burst near a tribal hamlet and I was confined there for almost 36 hours. It was April and fragrant mahua flowers were spread for drying in front of every house. Residents said they were preserving the flowers for the rainy season to make mahua bhakhar—sweet bread made of dried mahua flowers and sorghum flour (see box on p43). They believe the warm properties of the flower protect from chills and aches during the rains. Amused by my curiosity, an elderly lady in the hamlet prepared two bhakhars for me and offered me a bagful of dried flowers to take home.

Back home, I tried my hand at making mahua bhakhar. But instead of patiently moulding it with hands, as the elderly lady had shown, I rolled it out with a rolling pin and proudly showed it to my mother-in-law. A few bites later we were deep into our first woman-towoman conversation about food.

She first explained how my shortcut technique changed the flavour and then told me about the varieties of mahua breads she used to eat as a child—bhakhar or thick chapati made of wheat or sorghum flour kneaded with crushed mahua flowers and pooran poli with cooked mahua flower stuffing. But she did not miss the chance to rue that her sons and daughters-in-law, like other young urbanites, now look down on traditional delicacies.

The incident, however, started a discourse on bhakhar between us. Over the seasons she introduced me to splendid bhakhar varieties, once eaten regularly but now either forgotten or eaten only occasionally. During the rains, she says, it is good to eat ambadi chi bhakhar, made with the sour leaves of deccan hemp, called ambadi, and sorghum flour (see box). In the winters, bhakhars are made from pulses like black gram and horse gram, and grains like sorghum and pearl millet.

She also handed me down the recipe for ambil, a cooling drink for summer months prepared by adding butter milk to a thick soup of jowar flour. But our debate on the art of bhakhar making continued. My mother-in-law holds that moulding bhakhar, almost twice the size of a regular chapati, between two palms is the best way to bring out the flavour of the grain. I could not see why the rolling pin would not do just as well. It took years for my palate to develop the refinement to realize that she was right. But since I could not pick up the art, we arrived at a midway arrangement—patting small bhakhars by hand on a flat surface.

My travels to rural and tribal areas in the meanwhile revealed to me bhakhars made of other millets, such as finger millet, little millet and buckwheat— each with its own distinct taste and texture.

My mother-in-law could not match my enthusiasm for these. To the mindset of her Kunbi community (a once powerful landed class, now reduced to backwardness) these are tribal foods, hence inferior.

But I inadvertently struck a deep chord with her when, after interactions with some tribal women in Yavatmal, I asked her about wild vegetables like tarota (Cassia tora), kundar and latari. She had long given up gathering and cooking these greens following sneers from her children and grandchildren. She joined me eagerly in scouting around for vegetables in the small pockets of roadside greenery.

With repeated bhakhar meals at home and during my tours, the hot, oily rassa; thin kadhi (soup of buttermilk and gram flour); and cloying kheer began to make sense. Though crisp and delicious, the bhakhar is nevertheless coarser and drier than rice or wheat flour chapatis. And it would be difficult to gulp it down without the strongly flavoured liquid accompaniments. And as my husband and mother-in-law prefer, it is best eaten when crumbled and made into a mush with dal or curry.