The scars in the stars

Two European experiments performed with helium-3 uphold the theory of defect formation during phase transition, and clear some of the fog over the genesis of our universe 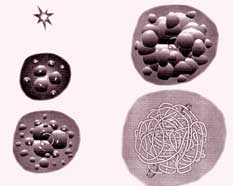 cosmology is one of those sciences where experimentation is rare. The scientist observes the universe and draws his own conclusions. But this might change now with reports of two experiments on the dynamics of phase transition in the early universe. These pioneering experiments, performed in France and Finland, have confirmed several theories about the history of our universe.

The basic idea of phase transitions is illustrated by the familiar example of melting of ice. The interesting phase transitions in the universe are, however, of a different kind -- those associated with spontaneous symmetry breaking. Though the idea of symmetry breaking in cosmology is a relatively recent one, it is well known in the subject of condensed matter. For instance, a magnet (or more precisely, a ferromagnet) when cooled below what is known as its critical temperature, displays this phenomenon. The magnet is believed to be made up of tiny elementary magnets. It is energetically favourable for these magnets to point in the same direction, selected at random. This choosing of one direction breaks the spherical symmetry exhibited by the magnet above the critical temperature.

According to the Big Bang Model, the universe was born at an extremely high temperature. At this temperature, the four elementary forces (gravity, the strong nuclear force, the weak nuclear force and electromagnetism) were unified into a single force. As the universe expanded and cooled, there were a series of phase transitions which broke the original symmetry. These transitions led to the separation of the unified force into the four forces that we now observe.

But there is another interesting consequence of symmetry breaking phase transitions; this is the generation of topological defects. This phenomenon, first pointed out by T Kibble, leads to the existence of monopoles, domain walls and cosmic strings. Though widely believed to exist, there has been no confirmation of these bizarre objects in the universe.

What is interesting is that the theory of defect formation is the same in cosmology as in condensed matter systems. Similar defects are expected and observed in systems like superfluids. Here too, symmetry breaking leads to topological defects called vortices which can be studied. Superfluid helium-4 has been studied extensively and a qualitative support for the theory of defect formation has been obtained.

But now, a much more detailed quantitative study has been done with helium-3. G Bauerle and his team at Grenoble in France have used an exothermic neutron induced-nuclear reaction to heat up a small volume of superfluid helium-3 above the critical temperature (superfluid transition temperature). As the system cools, the normal regions become superfluid again. But with a difference, since different pieces choose the manner in which they become superfluid independently. This process leads to the formation of vortices. Since the initial energy given to the fluid is known, by measuring the heat given out when the fluid cools, the Grenoble team was able to determine exactly how much of the energy remained in the vortex lines.

V M H Ruutu and his colleagues in Helsinki, Finland, used a similar technique in creating the defects. But instead of using the energy deficit to determine the density of vortex lines, they directly monitored the number of vortex lines using nuclear magnetic resource ( nmr ).

The results of both these groups are consistent with each other. More importantly, the initial density of these defects is used to obtain the size of the domains formed in the material. Interestingly, the size obtained is in agreement with that expected theoretically in such systems.

The success of these experiments is a crowning achievement for the theory of defect formation during phase transitions. It also opens up a host of possibilities for the study of different phenomena. For instance, it may be possible to use an accelerator to restore a kind of symmetry called chiral symmetry in a small region of space, with far-reaching implications. The experiments have shown that the theory of defect formation is essentially correct and if there are defects in the universe, they should be present with the density required by the theory.