The secret of carbon nanotubes 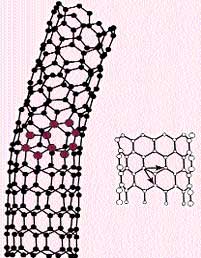 nanometre-sized molecular materials hold great promise for future generation devices. These materials could serve as building blocks of electronic devices of an amazingly small size or could even form the basis for self-assembling machines. But before all that, it is essential to understand the fundamental electrical and mechanical properties of these structures.

One of the most exciting materials to be discovered in recent years has been carbon nanotubes. These elongated 'fullerenes', named after Buckminister Fuller, the inventor of the geodesic dome, have many potential applications. Theoretical studies have indicated that these tubes are very sensitive to small changes in their dimensions and orientation.

A major hindrance to a deeper understanding of these fascinating objects has been the inability to make measurements on individual nanotubes. But two important recent experiments may have solved this problem. T W Ebbesen and his colleagues at the nec Research Institute, Princeton, us , have reported measurements of electrical conductivity and Youngs modulus (a measure of the tensile strength of a material) of individual nanotubes. The carbon nanotubes are characterised by a high stiffness and large axial strength because of their peculiar seamless cylindrical graphitic structure ( Nature , Vol 381, No 6584).

Ebbesen and his team used a transmission electron microscope to measure the intrinsic thermal vibrations of these tubes. The tubes were prepared by using the carbon arc method for depositing the carbon. The team found that the nanotubes had an exceptionally high Youngs modulus. The typical value for these tubes was in the tera pascal (a million million) range, which is significantly higher than for other similar materials; for instance, carbon fibres have a value which is about a tenth of this value.

In another experiment, Ebbesen has reported the measurement of electrical conductivity of individual nanotubes. The technique used to prepare the nanotubes was similar but the tubes were further annealed in an argon-rich environment at a temperature of about 3,000 c . This removes most of the defects of the tubes. Electrical conductivity was calculated by a four-probe measurement with tungsten leads which were deposited by a lithographic treatment across the tubes.

With the technology available for performing measurements on individual tubes now available, the goal of designing devices with these is closer. Their unique properties make them desirable for a host of applications. For instance, their high Youngs modulus makes the nanotubes the ideal material for carbon-fibre reinforced materials of high strength and low weight.