The stock that wasn't there 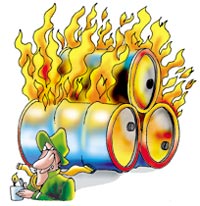 On July 7 this year a warehouse in a residential area of Asuncion, Paraguay's capital, caught fire. The warehouse, belonging to the ministry of agriculture and livestock and stocked with pesticides, was completely gutted. The fire triggered off fears of severe contamination. But three months later, all 1,100 people living in the vicinity are completely healthy and the investigation into the incident has been turned over to anti-corruption authorities.

This is because the initial probe, undertaken by the environmental wing of the office of the public prosecutor, came across compelling evidence that the blaze may have been purposely set. Environmental prosecutor Isacio Cuevas believes that most of the stock had been removed from the warehouse before the fire.

The warehouse should have had 24,610 litres and 6,803 kg of toxic agrochemicals -- including fungicides Propiconazole, and Folicur and insecticide Trebon. But the case file shows fire fighters found no signs of these products among the charred remains. The entire stock had been donated by Japan under an aid programme called 2kr.