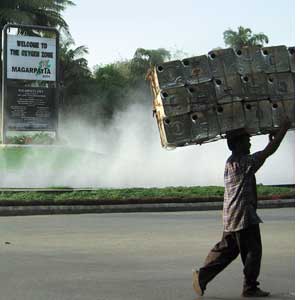 Neelima Muppa's day begins at 7.30 am. A quick glance at the clock and a glass of juice later, she hits the nearby gym. Back home in 40 minutes, she showers, changes into office wear, and sits down to have breakfast. Her office starts at 9 o'clock, and 15 minutes before she's expected in the office, she slings her bag on her shoulder and strols towards Cybercity in Magarpatta.

Pune's notorious traffic jams do not set the pace of Muppa's daily chores. "It is hard for my friends to believe that I walk to office. Since I shifted to Magarpatta, the quality of my life has undergone a sea change--no more skipping breakfast, no more jostling in crowded buses," said the 27-year-old techie from Andhra Pradesh, who has been living at Magarpatta City on Pune's outskirts for a year and a half.Muppa is paying a monthly rent of Rs 11,000 for a two-bedroom apartment that would cost her Rs 8,000 in other localities, but she does not mind paying extra for the comforts she gets here.

"I use the time I save on commuting to meet friends, read or work out at the gym," she said.

Magarpatta was designed to be a walk-to-all-destinations township. "We wanted to create a city where everyone follows one mantra walk to school, walk to work and walk to recreation," said Satish Magar, chairperson and managing director of Magarpatta Township Development and Construction Company, floated by farmers of the Magar clan who owned the 160 hectares on which the township has come up. "When I came up with the idea in early 1990s, no one took me seriously. I had an agrarian background without much construction experience. It took me seven years to convince the Maharashtra government."


Magarpatta is the first project in India in which farmers pooled their land and created a township, rather than selling their land to a real estate developer. Magar, an agriculturist with a politically active family, convinced 120 farmer families about the project in 1993. His immediate family owned over 40 per cent of the land.

The same year he approached Sharad Pawar, the then Maharashtra chief minister, with his proposal. "It was natural for the state government to be wary because no farmer had ever attempted what we proposed. Questions were raised about the source of money and about paying back customers in case the project failed, but I was confident," said Magar.

Although Magar is close to the political establishment (he is the nephew of a local political heavyweight, Annasaheb Magar, who was instrumental in establishing the twin industrial township of Pimpri-Chinchwad near Pune in the 1960s), he decided not to skip steps and waited till 2000 to get all clearances. "I met senior officials and in seven years I managed to convince the government that Magarpatta City was doable," he said. Being rich, Magar could travel to several countries with his architect to study how urban cities were planned.

Each family got shares in the company according to its landholding, and each share is equivalent to 1 square metre of land. According to an article published recently by Infochange, an online resource base of developmental news, the cost of one share has gone up from Rs 100 in 2000 to Rs 1,000 in mid-2008, and the cost of a hectare from Rs 3 crore in 2000 to Rs 3.75 crore in 2007. Thirty per cent of the cost of construction was earmarked as cost of land and paid to the shareholders. A shareholding family has the option of reinvesting the amount in the company in the form of a term deposit.

Land title remains in the name of the farmer even when the land is developed and urbanized.

Shareholders can also invest in the construction of commercial spaces and are encouraged to bid for contracts for development work in the township, such as supplying raw material for construction and contracts for labour shops, landscaping and security.

To ensure smooth transition of the next generation of the clan from an agrarian economy to urban, Magar's team carried out an aptitude test of farmers' children to understand what they were good at. "Based on the results, we got them trained in various skills. Once the training was complete, we approached banks and got them loans against their land to start some business," said Magar. These farmers also own apartments and bungalows in Magarpatta City and receive handsome rents.

The farmers' company maintains the township, and stresses environment-friendly services. "We collect household and commercial waste and treat it without an additional charge," said Manik Sharma, the company's general manager responsible for sales and marketing. "Residential buildings are provided solar water-heating systems. Two sewage treatment plants are functional and another two are under construction. Treated sewage is used for horticulture and flushing. We have built the roads inside Magarpatta and are also maintaining them."

There is no monthly maintenance charge. The customer has to pay a one-time fee--Rs 3 lakh for a three-bedroom flat--when buying an apartment. The company has set up a division of 250 workers to look after the day-to-day functioning of the township.


Every day, Magarpatta City generates more than four tonnes of garbage, which is collected and treated on the city premises. Very little waste is sent out to landfills. The waste is segregated and then used for either vermicomposting or fed to the organic waste converter or the biogas plant for power generation. Explained Seema Suryakant Bhosale, who runs the waste management centre at Magarpatta "Daily about 1.5 tonnes of waste is fed into the organic waste converter to make compost. We also produce three tonnes of vermicompost a month, which is more than our requirement."

Magarpatta's two-tonne biogas plant generates 80-100 cubic metre gas per day which is converted into over 270 units of electricity. This power is used to operate garden pumps and run fans and tubelights in the pantry.

Impressed by the township's environment friendly features, the Pune Municipal Corporation has offered 10 per cent rebate on property tax to Magarpatta's residents. The city is planned for 7,000 solar water-heating systems, each with a capacity of 125 litres per day--4,000 of them are installed. On completion, this will save 48,000 units of electricity per day and about 12,000 tonnes of carbon dioxide emissions a year.


There is no doubt Magarpatta farmers have carved a future for themselves--and on their own terms. But a set of urban planners believe that such walled-and-gated townships come with their own set of problems.

"It is like any other gated community project in Gurgaon or Pune. It is based on the notion of 'us' and 'them'. Gated communities like Magarpatta are a class apartheid of a different nature," said Clifton D'Rozario, an advocate who works on urban development and is associated with the Bangalore-based think-tank Alternative Law Forum. P Radhakrishnan, professor at the Madras Institute of Development Studies, agreed such townships create artificial social exclusion.

Radhakrishnan is for a more inclusive idea of urban planning. In the case of Magarpatta, he mentioned its domestic helps, drivers and watchmen come from slums outside the township. "Urban planning must also take into account the needs of the poor working class; they should not be used and thrown back in ghettos," said Radhakrishnan.