The toxins of war

Are chemicals used during the Gulf War causing sperm mutations among the war's soldiers? 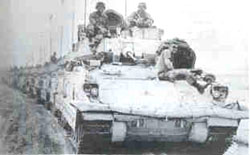 A DEBATE is raging in the us about the "Gulf War Syndrome" -- a mysterious illness that has scientists completely at sea. An extensive range of unexplained health problems has surfaced among soldiers who fought in the 1991 Gulf War, as well as in their families. Reports are coming in of birth defects, severe fatigue, rashes, headaches, memory loss and diarrhoea, among various other symptoms.

Even as baffled investigators hypothesise about the possible sources of these ailments, including infectious agents and toxic chemicals used in the wars, the Pentagon vehemently denies that such weapons were ever used. Its defense has been vindicated by a new report from the National Academy of Sciences' Institute of Medicine, which says that there is "absolutely no reliable evidence, and no medical or biological justification" for such claims.

Sceptics, however, are not entirely convinced. Of late, a flurry of media reports have appeared in the us about the transmission of Gulf War-related ailments from soldiers to their families. About 20,000 of the 700,000 American troops who fought in the war are reported to have signed a register of potential victims of the syndrome. In late October 1994, according to a spokesperson of Senator Donald Riegle, who led Congressional investigations into the reports, 400 preliminary responses in a survey of 1,000 patients on the register showed that 78 per cent of their spouses and 65 per cent of their children born since the war suffered from some unusual physical maladies.

There were other alarm signals as well. Higher than expected birth defect rates were reported from families living at Fort Bragg, us, the base for the 82nd Airborne Division which was in the war's frontlines. Infant mortality rates too suddenly increased in military installations in Mississippi, Kentucky, Tennessee, Georgia and Texas.

But the Pentagon has consistently refused to recognise the symptoms as a disease. It also denies that there is enough evidence of illnesses in the Gulf War's soldiers having been transmitted to their spouses and children.

Ellen Silbergeld, a molecular toxicologist at the University of Maryland, told a Congressional hearing in August 1994 that evidence exists that men exposed to toxic chemicals can transmit the poison to their unborn children through their semen. Genetic mutations in the sperm, resulting in defective childbirths, she said, were a very real and a frightening possibility.

The Institute of Medicine's recent report may give us military authorities some breathing space, but the frequency of these incidents and the glare of media attention is likely to keep the issue contentious for some time to come.