The watermark offailure on the Government of India's mantle glares everybody in theface, as two warring riparian states flex their muscles in the absence of an effective national water management policy 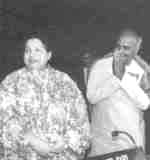 THERE seems to be a full in the storm over the Cauvery river water distribution issue between the riparian states of Karnataka and Tamil Nadu. This appears to hinge not so much on the needs of either of the states for water, as on political mileage that the Centre and the respective state governments would be able to derive from the issue, faced with the forthcoming general elections in India.

The Cauvery issue focusses on the lack of a clear-cut national policy for the management of river basins, coupled with blatant disregard for the decisions of respective tribunals and the glaring absence of guidelines for a national water policy.

The 760-km long'Dakshina Ganga', or the Cauvery river, has a 100-year old history of dispute over the sharing of its waters. The first agreement on the distribution of its waters had been signed by the governments of Madras and Mysore in 1892.

Prior to this year's confrontation, which saw state-wide bandhs, road and rail blockades, and numerous preventive arrests in Karnataka, a similar drama bad been enacted in 1993. The highlight then was an 'indefinite fast by the chief minister of Tamil Nadu, J Javalalitha, when Karnataka had categorically refused to release water to Tamil Nadu. The situation was retrieved after the Centre promised to set up a monitoring and Implementation committee to look into the issue.

With the parched state of Tamil Nadu and a belligerent Karnataka spitting fire and brimstone at each other, a three-member panel was set up by the Prime Minister P V Narasimha Rao with an aim to rectify the situation. If this was any indication of heralding in peace, noody expected anything substantial in terms of a stable solution.

The three-member panel of experts, comprising of Y K Alagh, vice chancellor (VC) of Jawaharlal Nehru University, New Delhi, Bharat Singh, ex-VC of Roorkee University, and a former chief engineer of Madhya Pradesh, was formed in early 1996. The panel had sought an extension "of a few days", over its January 10 deadline to submit its report, although sceptics expressed doubts about any positive development.

"There is not a single river basin authority in the country," R Iyer, former water resources secretary, had pointed out in an analysis on Indian Federalism and Water Resources- "The path that has been followed is that of Allocating shares in a river, among the states concerned. State identities have proved too strong," he commented.

Former chairperson of the Central Water Commission, R B Shah, pointed out that other than tribunals, there was no other statutory remedy under the Constitution. Ironically enough, the situation flared up after the December 16 directive by the Cauvery Water Disputes Tribunal had directed Karnataka to release 11 tmcft of water to Tamil Nadu.