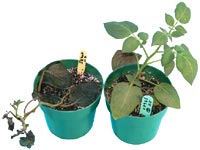 scouring the genome of a wild Mexican potato, scientists have found something astonishing -- a gene that protects potatoes from late blight. The world's most serious potato disease, late blight kills any plant it affects. Late blight is best known as the cause of the Irish potato famine. Appearing from nowhere in 1845, Phytophthora infestans (a fungus) wiped out the staple crop of the densely populated nation, causing mass starvation over five years and sparking a wave of immigration that had worldwide social consequences.

Prior to the 1990s, chemical fungicides effectively held the disease at bay. But new strains of the pathogen emerged, requiring farmers to treat their fields as many as a dozen times during a single growing season at a cost of around us $250 per 0.4 hectares.

The discovery of the gene and its cloning by scientists from the us-based University of Wisconsin-Madison (uw-Madison) holds significant potential. The gene was found in a species of wild potato known as Solanum bulbocastanum. The plant co-evolved in Mexico alongside the late blight pathogen. It was discovered, ironically, due to the emergence of a new strain of P infestans that plagued the us in 1994. At uw-Madison's Hancock Agricultural Research Station, the only plants to survive were of the wild Mexican species. Subsequent to the outbreak, a hunt for the genes that conferred resistance on the Mexican variety began.

Now, with the help of the gene, scientists have developed plants that can survive exposure to many strains of P infestans. But the technology's wide utilisation is doubtful because of fears about genetic modification. Still, the scientists plan to develop varieties for the garden, hoping they will win the acceptance of consumers.