The writing is on the Great Wall 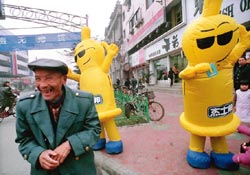 An hiv/aids catastrophe is staring China in the face. A un report warns that spread of the virus in the country could result in unimaginable human suffering, economic loss and social devastation. The report revealed that by the end of 2001, 0.8 million to 1.5 million Chinese were infected with hiv, the virus that can cause aids, up from 0.5 million at the end of 1999. The prevalence in certain areas had reached explosive levels that threatened to spill into the general population through sexual transmission, the document said.

China could have 10 million hiv sufferers by 2010 if no effective counter-measures were taken, unaids officials said. Last year, the media had exposed the rampant spread of hiv in rural Henan province, where farming families contracted the virus from selling plasma to illegal blood banks. The unaids report pointed out that there was a minimal increase in awareness of the disease over the years due to the lackadaisical approach of the Chinese government. The report blamed institutional red tape, a lack of commitment and poor leadership by government officials, insufficient resources and a crumbling public healthcare system for the slow response.