The year of Microsoft

The software giant rides high on the success of Windows 95 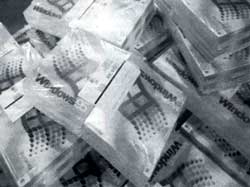 MICROSOFT Corp chairperson Bill Gates calls it "a phenomenon". On August 24, the us software giant unleashed the latest in its arsenal of operating systems all over the world. Preceded by a us $200 million -promotional blitzkrieg, the much awaited Windows 95 (Win95) - expected to revolutionise PC desktops with the help of Microsoft Network, the company's new online service - came into being.

Win95 is the first major upgrade to Windows, the operating system for 8 out of 10 PCs, since 1990. The key features of the new operating system are pre-emptive multi-tasking (running more than one program at a time), Multi-threading, scalable performance, support for 32-bit applications as well as the existing 16-bit ones, increased reliability, faster printing, better multimedia support, more memory for MS-DOS- based applications, support for mobile computing and a "plug-and-play" concept which makes adding a modem, printer or network card as easy as it is on Mac.

The us Justice Department's investigations into Microsoft's contracts with PC makers has not put much drag on the company's onward thrust. Fuelling an already booming PC market, Microsoft is aiming to rake in about us $1 billion on Win95 upgrades in its first year (not including the applications programs).

While computer users worldwide plan to upgrade their hardware to run the new system, software compa- nies and makers of chips, memory, graphics equip- ment and modems are awaiting the inevitable surge in demand. "We do expect Win95 to be the one key element for customers buying Pcs," said Jacques Clay, general manager of Hewlett- Packard's worldwide desktop PC business. The International Data Corporation has predicted that by 1996 end, nearly 70 million PCs worldwide will be running Win95; at us $50 to $100 a copy, it translates into big bucks.

In India, Microsoft plans to sell about 100,000 copies in the first year. Microsoft India manager Rajiv Nair says the new software would reduce support costs and increase desktop control and end-user productivity. However, the cost of upgradation - which works out to Rs 22,800 for a steep machine - might prove a dampener for many an enthusiast.

Like any other money-spinning innovation, Win95 too has been plagued by piracy. Counterfeit copies of the program have been reportedly on sale in Hong Kong and China since last bctober, when the first trial versions became available for users to test. In the Netherlands and Belgium, 50,000 copies of the system are circulating illegally.

Microsoft's gain is loss for some. International Business Machines (IBM), which is countering the Win95 media hype with reminders to computer users about its own existing os/2 system, could very well be one of the losers. The os/2 occupies only 10 per cent of the market; with Win95 matching many of its features, its vulnerability has increased. To compete with Microsoft, a group of 50 Japanese, us and European companies have come together to set the standards for the next generation of a key operating system.