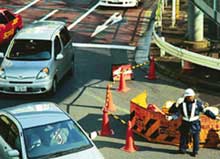 A substantial majority of Japanese accept the idea of an environment tax on the carbon produced by burning fossil fuels, according to a survey by the country's environment ministry.

The ministry and environmentalists have long urged the introduction of such a tax, which would help curb energy use and reduce the greenhouse gases. but the business lobby has opposed any such move. According to the ministry's Internet survey, 77.7 percent of 1,442 respondents said they would accept the tax of 2,400 yen (about us $20) for every tonne of carbon emitted from fossil fuels, while 17.3 per cent say they would not support the levy.