It could be for your own good 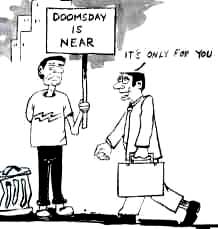 New evidence suggests that those who look on the bright sides of things live healthier and longer than their gloom-and-doom counterparts. For years, research has shown that optimists weather coronary bypass surgeries better and also live longer with HIV, the dreaded acquired immunodeficiency syndrome (AIDS) virus . But optimism not only helps those who are down and out, it is deemed good for healthy people as well.

When under tremendous, unrelenting stress - in this case, the first semester of a law school - students who were optimistic about doing well had more T-cells and natural killer cell and activity than they had before the beginning of the semester. These immune factors, which help thwart infection, showed little change in the pessimists.

The findings strengthen the notion that thoughts and feelings can affect the immune system, said Suzanne Segerstrorn, an assistant professor of psychology at the Lesington-based University of Kentucky and the lead author of the study (Journal of Personality and Social Psychology, June 98).

Other research has found that the more stress people experience, the more likely they are to get colds. The new work raises the possibility that optimism may, in fact, help people from falling ill during those tiring days, says Segerstrorn. "This study provides an important link in the optimism literature: immunological data," said Janice Kiecolt-Glaser, a professor of psychiatry at Ohio State University College of Medicine in Columbus, USA. Kiecolt-Glaser and her husband Ronald Glaser, study how stress and emotion affect the human immune system.

The study followed 90 healthy students just before they started law school through the middle of their first semesters, a notoriously-stressful period. In the beginning, blood tests revealed that alt of the students had comparable levels of T-cells and natural killer cell activity. These measurements were repeated after about eight weeks to see whether they had changed.

But while the optimists did have these healthy traits, as measured by questionnaires assessing health-related traits, only mood and stress had any bearing on the immune system measurements, and it was small. "This suggests that there's something we didn't measure about optimism that explains the immune system effects," Segerstrom said.

The other question is whether the immune system factors went up enough in the optimistic law students to reduce their risk of contracting colds or other infections. Though comparable increases have affected the course of illness in immune systems were weakened by poor health, it is not known whether they would have any effect on healthy people, Segerstrom said.

Perhaps the most encouraging news from the study is that the brand of optimism that proved key is not a hardwired personality trait, but something that pessimists can adopt with a little help, say psychologists.