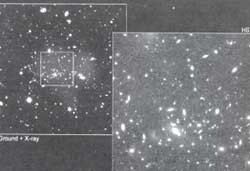 THE Hubble Space Telescope (HST) has never failed to surprise us. A team of us astronomers have recently used it to discover what may be the oldest and farthest galaxies ever seen. This will have a serious impact on the theories on the evolution of the Universe and formation of galaxies. The so-called Deep Field exposure was taken in 1996 when the HST looked at a patch of sky for 10 days. Scientists need to look at a particular patch for such a long time since most of the galaxies, our cosmic 'neighhours', are many light-years away. This astronomical distance implies that they are extremely faint and almost invisible, even to a powerful telescope such as the HST. The observed galaxies are 11.7-odd billion years old, and that makes them ancient, even by the standards of the Universe.

The stars in these galaxies were originally shining in ultraviolet light, but the expansion of the Universe 'redshifts' the light into the visible wavelengths- The expansion of the Universe is pushing all objects away from each other. The further the object, the faster is the receding.When a receding object emits light at a certain wavelength, the light observed by us has a longer wavelength because the source is moving away from us. This phenomenon is exactly like the change in the pitch of the whistle from an approaching or a receding train.

The detectors on the HST, however, would not have seen objects whose light had redshifted even more -and hence were farther off- into the infrared region. To detect these, R Thompson and his team at the Steward Observatory in Arizona, USA, looked at the same patch of the sky using the HST's infrared detector.

The detector, termed NICMOS, looked for 36 hours at a part of the original patch containing some 300 visible galaxies- The results were astonishing. The team found 100 more galaxies out of which about 10 were among the farthest objects known to us.

The enormous distance can be gauged from the fact that if we believe the Universe to be about 13 billion years old, then these galaxies go back to some 12.7 billion years. Though the objects have been spotted, the details are still missing. They are too far away to give us information about their shape and composition. For that we will have to wait for the Next Generation Space Telescope, slated to be launched sometime in the next decade. But even without details, the finding throws up very intriguing questions regarding our current understanding of how galaxies formed. In a few million years after the birth of the Universe, how matter could have organised into well-formed galaxies is something that is going to puzzle cosmologists since most theories do not favour such rapid formation of galaxies (Science, Vol. 282, No 2138).