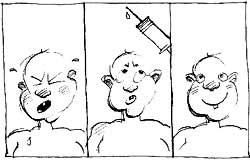 researchers say that more than 40 per cent of patients with chronic pain are misdiagnosed. It affects men and women equally and is undertreated in children, according to reports presented at a seminar of the American Medical Association (ama) held in New York recently (British Medical Journal , Vol 315, No 7102).

Neil Schechter, director of the department of behavioural and developmental psychology and his colleagues at St Francis hospital, Hartford, Connecticut, have designed a programme that can easily be duplicated with no additional expenditure. While conducting the study, they found that there was no uniform method to determine the level of discomfort experienced by children, no place to record the information and no agreement on which medications could be given to relieve pain. Some doctors were using inappropriate pain-relieving methods such as injecting a drug called Demerol that led to several complications in children (Pediatrics , Vol 99, No 6).

Most of the children did not divulge pain caused by a disease and surgery just to avoid an injection. Several children were found to be suffering from pain that was mainly due to bad planning. For instance, drawing out blood for multiple purposes was never coordinated that resulted in multiple pricking with needles. To streamline the system, the researchers have devised standardised procedures for assessing pain, and its relief. The method expects nurses to ask children of eight years and older to rate their pain on a 1-10 scale where 10 being the level of worst pain.

According to them, severe post-operative pain should be treated with continuous infusion of morphine or other opiods rather than weak drugs or intramuscular injections. When they have to be pricked with needles, a suitable anaesthetic should be used.

Schechter's 'ouchless' pain management programme prohibits doctors to ask for tests without adequate reasons. The programme also emphasises on parental involvement with children all the time. Parents should be taught to help take the edge off their children's pain and anxiety through games and story telling.

The children's ward at St Francis hospital has been renamed 'Ouchless Place'. "The approach does not rely on expensive pain services or highly technical methods of providing care and is therefore, applicable to any setting in which ill children are cared for", the researchers say. Besides human and economic factors, there are other reasons to take pain management in children seriously.

The ama meeting recognised that morbidity and mortality were lower and post-operative complications fewer among infants who had deep anaesthesia during surgery than those who received minimal anaesthesia.

One of the widespread myths in the medical profession is that children do not feel pain as intensively as adults and hence need not be given the kind of pain relievers such as narcotics given to adults, as paediatricians feel it may cause addiction in children. Kathleen M Foley, pain services chief at the Memorial Sloan-Kettering Cancer Center in New York says, "We need to change the attitudes of physicians as well as patients."