Threat of a retardant 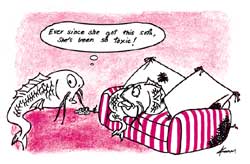 freshwater fish in Virginia contain the highest worldwide reported levels of penta bromo diphenyl ether (pbde), a chemical that is commonly added to polyurethane cushions for slowing down fires. The discovery, made by researchers from the us-based Virginia Institute of Marine Science (vims), has raised concerns because pbde is structurally similar to polychlorinated biphenyls (pcbs) -- a known human carcinogen.

During their study, the researchers examined more than 1,000 fish from 332 different locations in the Roanoke and Dan river basins. In total, 33 species of fish were tested, including striped bass, catfish and carp. The scientists found that 89 per cent of the tested fish were contaminated with bde-47, one of the two main constituents of pbde (www.nytimes.com, January 31, 2002). One carp from the Hyco River contained more than 47 parts per billion of bde-47, the highest known amount to be recorded in any fish so far.

In another study, pbde levels in breast milk of North American women were found to have increased exponentially over the last decade -- from two to 200 parts per billion. "Anything that is increasing at such an alarming level is a matter of concern for any regulatory body. Moreover, the toxicology knowledge about pbde is very limited," said Jake Ryan, a senior researcher with Health Canada, an Ottawa-based network disseminating information about health. Scientists are still clueless about how the chemical enters the environment and consequently the human food chain. "We just don't know for sure," said Robert Hale from vims. According to him, the chemical could be seeping into the environment when discarded cushions disintegrate, as water and sunlight break the foam into crumbling pieces that eventually form part of the dust. Moreover, even insects munch away the material. Through such ways, the chemical may be travelling all the way up the food chain to humans.

Experts claim that the present levels of pbde are not dangerous for human health. But these levels are increasing at a fast rate. Researchers in Canada have studied the historical trends of pbdes in lake trout by comparing amounts of the chemical in archived trout samples with trout caught in recent years. "We found that pbde levels of the lake increased 300-400 times from 1978 to 1998," said Mehan Alaee, a scientist at Environment Canada, a Canadian government department. In the wake of such studies, many countries are reducing the use of the pbde products. The European Commission has recently approved a ban on one type of pdbe from July 2003. The European Parliament has proposed to extend this ban to include other pbdes as well. However, in the us, which accounts for 98 per cent of worldwide pbde use, the demand for the chemical continues to increase. Production of pbde in the country doubled to 8,500 tonnes between 1992 and 1999. According to the us chemical industry, more research is needed before taking any decision about banning the chemical. us producers of pbde say that there is no evidence about the chemical accumulating to harmful levels.