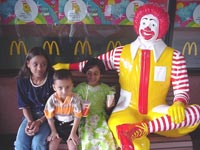 October 16, 2002 is UN World Food Day. It is also the 18th annual worldwide Anti-McDonald's Day. A day of protest against the promotion of junk food, the unethical targeting of children, exploitation of workers, animal cruelty, environment damage and the global domination of corporations over our lives. In 2001, there were local protests against the company in Australia, Phillipines, Canada, Brazil, New Zealand, Malta, Israel, Italy, Russia, Croatia and the US. The protests are going to spread this time. The protestors want the gullible consumer to see through the glossy marketing propaganda that big business continually forces upon them.

Even though McDonald's has made all-out efforts to stand up to bad publicity, its reputation continues to sink. The company through its advertisements and promotions lures children. It wants 'Global Domination' which means undermining of local markets and communities. The biggest paradox is that McDonald's promote their food as 'nutritious', however, it is high in fat, sugar and salt, and low in fibre and vitamins which causes a host of deadly diseases. The company which earns billions does not pay overtime rates even when employees work very long hours. Worse still, McDonald's promote meat products, encouraging people to eat meat more often, which wastes more and more food resources. Consider this: seven million tonnes of grain fed to livestock produces only one million tonnes of meat and by-products. The menus of the burger chains are based on the torture of millions of animals. Most are intensively farmed, with no access to fresh air and sunshine, and no freedom of movement. Moreover, every year McDonald's uses unnecessary packaging, most of which ends up littering our streets or polluting the land buried in landfill sites. If you want to join the protest, go to www.mcspotlight.org/issues/intro.html and send the text to as many people as possible.