Thumbs up for Monsanto's maize 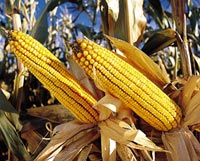 The European Commission (ec) has permitted import of food products containing Monsanto's genetically modified (gm) nk 603 maize. The decision was announced on October 26, 2004. It is meant to take effect immediately and would remain valid for 10 years.

The ec had already permitted import of nk 603 maize, tolerant to glyphosphate herbicide, in animal food and industrial processes. The new move permits import of foodstuffs for both humans and animals containing nk 603 and its derivatives like starch, oil, gluten and grains. But the maize has to be grown and harvested outside the eu and any product containing this variety will have to be clearly labelled, as per eu legislation. A five-year European ban on gm products ended May 2004, when ec permitted import of another gm corn, bt-11.