Electronic tickets are fast becoming popular in the us and Canada 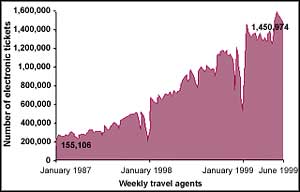 consider this: You are about to check in for your connecting flight and you discover your ticket is not with you. A frantic search but it is untraceable. To free you from these pre and post-travel tensions, ticketless travel involving two airlines is fast gaining ground with support from airline companies in the us and Canada.

The two top carriers in this region, American Airlines and Canadian Airlines , jointly began issuing electronic tickets last month. They say that it is for the first time, ticketless travel has become a possibility for trips involving a change from one airline to another. Passengers commuting between these two airlines need only to show up at the airport and flash some identification, and hop on the plane.

This development represents the next step for ticketless travel, which is becoming popular with the airlines and travellers alike. Recently, United Airlines ( ua) announced that 51 per cent of the tickets used in May were electronic. This was the first time that ticketless passengers outnumbered those with the conventional paper tickets. This is a welcome sign for the travel industry, which had seen growth in ticketless travel start to level off.

However, this procedure has its own share of detractors. Some corporate travel managers still resist flying without paper tickets. Eight out of 10 corporate business travel managers surveyed by the National Business Travel Association (nbta) , cite two main reasons against ticketless travelling. First, the failure to conquer fears of travellers about not having paper tickets in hand. It is rare but it sometimes might happen that the reservation clerks are unable to find the passengers e-ticket in the computer system. Secondly, inability of the different airlines to hand off electronic ticket reservations to each other.

"The individual traveller has not felt a real comfort level with not having a piece of paper in hand called ticket," says Norman Sherlock, executive director of the nbta .

The American and ua had planned to share ticketing by this summer. Now, this will not happen until at least next year, at the earliest, because airlines hesitate to unveil a complicated new system during the peak summer travel season.

Airlines want to encourage more e-ticketing because it saves them money. American estimates that the savings amount to us $2 per ticket. American flew 81 million passengers last year, of whom about 35 per cent were ticketless. Moreover, the growth of the Internet as a sales tool is going to be another factor in the growth of e-tickets," says another official of American.

Passengers, too, say they do not want to revert to paper tickets. "It is a lot easier, especially at the last minute," says Steve Atwood, vice-president of a party goods company in Dallas. His travel agent is also not complaining since gone are the days when they had to courier paper tickets to him, with only few hours in hand.

Sue Fullman, who is in charge of United's electronic ticket distribution, says the airlines are "working through the operational issues," namely, training reservations clerks and gate attendants in how to find and process ticketless passengers.