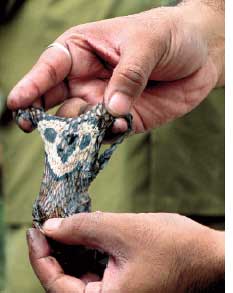 on july 17, Sunderbans forest officials posted in Netidhopani came across a dead tiger near their field office. A post mortem revealed the tiger had eaten two cobras, one of them was a king cobra. Tigers are not known to prey on snakes; wildlife experts speculate the tiger may have eaten them because of food shortage caused by cyclone Aila that struck two months ago.

"In my 28 years of experience in Sunderbans, I have never seen or heard of a tiger eating snakes. Non-availability of regular food may have driven the tiger to kill the snakes," said Pranabesh Sanyal, former director of the Sunderbans tiger reserve. Anurag Danda, coordinator of wwf's Sunderbans programme agreed with Sanyal. "A day after Aila, my team and I counted 11 deer floating in the Dattar river," said Danda.He said he visited two of the 54 wildlife inhabited islands in the Sunderbans and did not see any wild animal. Gopal Mondal of Chotomollakhali island said four deer had surfaced near the island. "We could save only one," he said.

Forest department officials denied Aila had damaged wildlife. Field director of the Sunderbans tiger reserve, Subrat Mukherjee, said it is unusual for tigers to eat snakes but this could not be taken as conclusive indicator of prey shortage. "The tiger was old and the cause of death was infections. Old age and ill- health may be the reason why it ate snakes," said Mukherjee.

Wildlife experts said the forest department shouldn't be dismissive. "Who knows what happened to wildlife on that fateful day? There was no monitoring so there is no proof if animals got killed and floated away," said Mrinal Chatterjee, a Sunderbans wildlife expert. Biswajit Roychowdhury, member of the state wildlife board, said the surging river water might have penetrated the islands and affected wildlife. A detailed study including that of the prey base needs to be undertaken immediately, Roychowdhury said.