At a recently held conference on tropical timber, producer nations demanded temperate forests be included in any agreement on international timber trade. 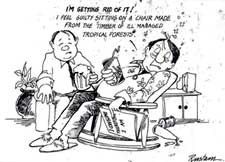 TROPICAL timber-producing countries insist temperate forests must be included in any accord reached to replace the International Tropical Timber Agreement (ITTA) when it expires next year. Their demand was made at a meeting of timber-producing and -consuming countries held in Geneva recently, even as Bruno Manser, a Swiss anthropologist, staged a partial hunger strike to demand a total ban on the tropical timber trade. Such a ban also has the support of the Netherlands.

Tropical timber accounts for only US $7.5 billion of the $85 billion world trade in timber. "We are talking of an agreement that concerns hardly 10 per cent of the international timber trade," explains Amha Buang, head of the Malaysian delegation, whose country is one of the 50 countries that participated in the Geneva meeting.
"We are certainly conscious," said Buang, "of the need to promote sustainable management and to arrest the decline of our forests. But, let the same environmental and commercial rules apply to all of us. We do not agree to the singling out of tropical timber as a convenient scapegoat and whipping boy for all the earth's environmental woes."

A delegate from Indonesia added, "The rich countries should not emphasise only the environmental and management aspects concerning tropical forests. If they are really interested, they should start putting their hands into their pockets."

The Indonesian delegate pointed out forest fires and shifting cultivation, quite common in Asia and Africa, cause as much harm to the ecosystem as the timber industry. Nevertheless, he added, affluent nations did not come forward to help when thousands of virgin acres in the country were reduced to ashes.

US delegation leader Milton Drucker argued ITTA was in accord with other pacts dealing with primary products, such as coffee. As such, he argued, the conference did not have the power to seek extension to other timber.

Tropical timber, nevertheless, has the potential to corner a large segment of the international market, if access is free. Forests cover more than 50 per cent of Malaysia and Indonesia, two of the largest producers. On the other hand, the average forest cover of an European nation is only 23 per cent.

Access to Northern markets is hindered by a number of tariff barriers. Japan, Europe and the US import primary products only. According to a study conducted by the World Wide Fund for Nature, only 8 per cent of the final price paid by the consumer in industrialised countries, reverts to the tropical timber-producing countries.

Support for producer countries has come unexpectedly from non-governmental organisations. Don Gilmour of the International Union for the Conservation of Nature contends, "Temperate forests contribute as much as the tropical forests to the preservation of the planet's ecosystem."

Views also differ about the target set for 2000: All tropical timber in international trade must be taken from sustainably managed resources. Consumer countries insist the target should figure prominently in the new agreement and they threaten to impose restrictions on timber coming from ill-managed forests. In response, the Indonesian delegate, expressing the sentiments of producer nations, said, "We shall take steps as best as we can, but quick and abrupt measures will do more harm than good."
Even the definition of sustainable forestry was not made clear at the meeting. Producer nations rejected a proposal for an international database that its supporters said would curb trade in identified, endangered tropical trees, even though a pilot study showed 304 traded tree species "are considered threatened at a global level".

With little progress achieved in the first round, the Indonesian delegate said his country would "rather have a bad agreement than no agreement at all" when the second round is held in June.