Common preservative can cause arsenic leaching 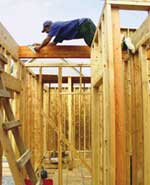 indiscriminate use of copper chromate arsenate (cca), a wood preservative, is fraught with the risk of arsenic leaching and contaminating soil and groundwater, warns a study conducted in the us .

T imber and plantation wood are commonly treated with cca, which has been in use for decades. cca increases the resistance of wood to fungal diseases and insects, giving it a longer life.

However, a group of researchers from the University of Miami, the University of Florida and Florida International University found clear evidence of arsenic leaching from treated lumber used in decks, utility poles and fences. The group studied rainwater runoff from a cca -treated deck for a year and discovered arsenic contamination to be 100 times higher compared to runoff from an untreated deck. Additionally, a layer of sand underneath the deck was found to have arsenic levels 15 to 30 times higher than background levels, while water that percolated through the sand also was contaminated by the toxic metal. The study was published in the online edition of Environmental Science and Technology, Research ASAP. The researchers have stressed the importance of due consideration to how cca -treated wood taken out of service should be disposed.

In India, rubber wood treated with cca is used in electric poles, railway sleepers and to make plywood. With 5, 67,000 hectares in the country under rubber cultivation, the potential for cca use and subsequent arsenic leaching is high.

However, scientists in India are trying to minimise the use of cca. A case in point is the Central Institute of Fisheries Technologies (cift), Cochin. Its scientists have been experimenting with cca -treated rubber timber for fishing boats to reduce costs and increase durability. But they also considered the threat of arsenic leaching into the aquatic environment, which is why their latest innovation involves coating cca -treated rubber wood with a resin and then with fibre-glass reinforced plastic (frp). "The frp layer on top bars any possible leaching of chromium or arsenic into the water (from the boats)," says Leela Edwin, a scientist in cift.

cift has made several such boats that are being used by fishermen co-operatives on an experimental basis and monitored by the institute's scientists. " cca is an excellent preservative but it needs to be used judiciously to prevent any contamination," adds Edwin.