Time for a facelift ?

A German company claims its silicon-based technology can restore the Taj Mahal to its past glory. But some experts doubt its effectiveness 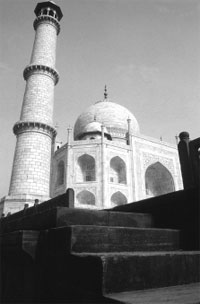 MANY monuments in India are in a dilapidated state. Among all causes — pollution and humidity, temperature, sunlight and salt crystallisation — water does the greatest harm by transporting acids from waste-gases (chemical corrosion), salts in the building material to the surface. It is also responsible for frost damages (mechanical corrosion) and growth of micro-organisms (biological corrosion). “Water is the biggest enemy of materials especially monuments. Like other monuments, the Taj Mahal also suffers from these water-related problems,” says S P Singh, head of the department of conservation at the National Museum in New Delhi.

Now a German-based company, Wacker-Chemie, hopes to introduce its new technology — that uses silicon polymer to strengthen monuments — on the marbles of the Taj Mahal. This polymer contains silica as its main ingredient. It works as a consolidant, impregnent and a water repellent. Heinz Geich of Wacker- Chemie said in New Delhi recently that his company will try to analyse whether this technology can help to restore the Taj and other monuments in India.

For restoring monuments, it is important to reduce the amount of water absorption by the building material. Past experience on other monuments has shown that silicon resins can be successful, says Geich. The big advantage of silicon resins lie in their similarity with minerals found in the stones that make the monuments.

Wacker-Chemie has worldwide experience in conserving and preserving famous monuments and statues such as the Brandenburg Gate in Berlin, Michaelangelo’s Pieta in Rome and the Temple Site Chichen Itza in Mexico. Explaining the process, Geich says that the microstructure of the deteriorated stone is stabilised through the introduction of a binder. The products used to conserve the stone are called impregnating agents and are applied to saturate the stone. The impregnating agent can impart certain properties that the construction material either did not have or has lost during use. One of these, is water repellency. Construction materials are not usually waterrepellent.

It also strengthens the microstructure and as far as possible restores the stone to its original condition. The idea for strengthening stone with ethyl silicate was first recommended by the German chemist August Wilhelm von Hofmann. Ethyl silicates are compounds formed by the reaction of silic acid with an alcohol. In lay terms, this is essentially a chemical reaction between quartz, which is often regarded as a precursor of all mineral compounds and an alcohol to give a soluble compound.

The soluble compound is then applied to the stone. On penetrating the stone, it is converted back into quartz (silica). The original alcohol is released and evaporates. Other major advantages of ethyl silicates is their good penetrating power and the fact that the pores never become clogged. The open pore microstructure assures gas and water vapour permeability. Thus the stone continues to breathe.

Stone strengtheners based on ethyl silicates are generally applied by spraying or flooding. “In our experience the best working conditions are a relative humidity of 40 to 70 per cent and a surface temperature on the construction material of 10°C-25°C,” says the organisation in their booklet. The success of stone conservation hinges largely on the depth to which the conservation agent penetrates into the stone. In any event, the stone strengthener must penetrate the weathered zone and replenish the depleted levels of binder with fresh binder.

However, one of the major drawbacks of the new technology is its irreversibility. “A conservator would not like to do anything to a monument or an artefact, while trying to preserve it, which cannot be reversed if found unsuitable after five or 10 years,” fears Singh. This fear was also one of the main reasons why the new technology was not adopted outright even though it has been in existence since the 1970s.

Sanjay Dhar, chief conservator of INTACH, agrees: “It is suitable for some buildings in some conditions and therefore it should be cautiously used in monuments like the Taj. In the late 1980s and 1990s, silicon-based technique was in vogue. But later, there were some voices of dissent on its applicability. I am not sure whether it is going to work well on marble and in Indian conditions.

Salt lead to the cracking and blistering of monument, leading to its damage. These salts come from pollution, from sub-soil water, sea sprays, as also from chemical reactions. Almost all excavated sites and exposed buildings are affected by saline actions, particularly those made of sandstone and brickstone, says Singh. These are natural pores in sandstone, limestone brick structures and mortars. In a dry atmosphere, the salts get crystallised on the monument causing disfigurement and scaling.

Till date, in India we have used acrylic and acetate-based materials to strengthen artefacts and act as a protective coating to the buildings. The major disadvantage noticed over the years in this technology was that it did not stop water from permeating through completely. Secondly, being organic in nature, its life was short. “The Wacker company technology and product takes care of this aspect. It does not allow water to permeate. The water drop on the building material remains on the surface and does not seep in,” says Geich. The product can be used as an invisible umbrella because there is no change on the surface of the monument. Geich adds that the company has enough experience on all different kinds of mineral substrates and also on marble. Especially marble is highly affected by acids/acidic rain. But it is nevertheless always very important to take a close and careful look to the specific substrate. It would otherwise be a sin to apply a protective agent to a heritage building without intensive preliminary tests! Sometimes natural stones have such a high quality that really need no protection others will be destroyed within a few years. And that’s exactly what we would like to check.”