Mosquito coils are finally in the dock, after a prolonged deference. Two independent studies indicate that coils commonly used in Asian countries, including India, can be disastrous for human health 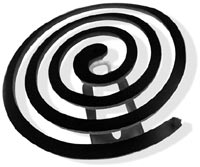 mosquito coils are finally in the dock, after a prolonged deference. Two independent studies indicate that coils commonly used in Asian countries, including India, can be disastrous for human health. While one indicates they contain a cancer-causing substance, the other estimates that a single coil releases particulate matter equal to 75 to 137 cigarettes. The studies are published in the September 2003 issue of Environmental Health Perspectives.

Mosquito coils are one of the four insecticide products popularly used by Asians to protect themselves from disease-carrying mosquitoes. (The other three are aerosols, liquid vapourisers and vapourising mats.) Coils are said to the most inefficient mosquito repellent. However, with an upsurge in diseases such as malaria, their use along with the others is on the rise worldwide. "In developing countries, mosquito coils are regularly used by middle class families which have small houses. Moreover, windows are kept closed during sleeping hours. These factors make people (especially children) more vulnerable to the harmful chemicals," assert the authors.

Most coils used in the developing world have pyrethroid insecticides, particularly d-allethrin, as the active ingredient. Though d-allethrin itself is not harmful, a chemical compound used as the synergist (called s-2 or octachlorodipropyl ether) is quite dangerous, claim the scientists from the department of entomology at the University of California Riverside (ucr). The synergist is a chemical substance used to boost the potency of the key ingredient, even though it lacks significant insecticidal character on its own.

The ucr team, comprising of Robert Krieger, Travis Dinoff and Xiaofei Zhang, says it is very likely that the coils are exposing users to bischloromethyl ether, also called bcme -- a potent lung carcinogen. The exposure can occur if the coils are used overnight, as they often are. On smouldering, s-2 breaks down into bcme and other substances. As bcme is extremely carcinogenic, the nature and extent of prolonged exposures that recur in homes during mosquito season in tropical countries can be quite risky, assert the ucr scientists. Interestingly, s-2 is banned in the us. In order to determine the degree of exposure to s-2 and bcme, the World Health Organization in 1998 called for further research on the harmful effects of the coils. However, to date, no such studies have been initiated.

The ucr scientists arrived at their conclusion mainly by analysing mosquito coils purchased from various retail outlets in the Indonesian cities of Jakarta and Bandung and those from several Asian markets in southern California. "The number of coil users in China is in the millions. In Indonesia alone an estimated seven billion coils are purchased annually," says Krieger. Scientists from the Malaria Research Centre (mrc) at New Delhi and Haridwar confirm that mosquito coils used in India also have allethrin derivatives such as d-allethrin and d-trans-allethrin as their key ingredient. This is also listed on the wrappers of most brands.

Another paper, by a team of scientists from Malaysia and the us, associates the coils with the emission of high levels of fine and ultrafine particulate matter (usually found in the emissions of diesel and petrol vehicles). The particulate matter can enter the lungs, and cause cancer. On an average, a single coil, smoldering for approximately eight hours, releases as much particulate matter as 75 to 137 cigarettes (depending on its brand). The researchers made a 'conservative' estimate that in ambient room conditions, the levels of particulate matter were six times higher than the us National Ambient Air Quality Standard for a 24-hour exposure. The authors, from National University of Malaysia, University of Pittsburgh and Rutgers University, examined emission rates of a variety of pollutants in coils made in Malaysia and China. They found that under the same combustion conditions, the Malaysian coils released more measured pollutants than the Chinese one. The cause seems to be the use of different base materials, with the Malaysian coils utilising coconut husks and shells, and the Chinese coils mainly using sawdust. All the tested brands had similar contents of active ingredients. As is the case with s-2, it is not pyrethrins, but the non-pesticide composition of the coils, that are to be blamed.

Experts say that such studies should be reason enough for consumers to switch over to herbal products, which are available in plenty. Those based on neem are used in many parts of India. They are not only efficient and good for health, but easier on the pocket.