Time of our life 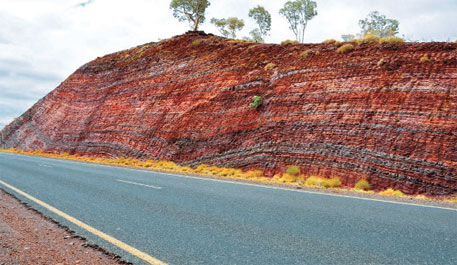 THE Great Oxidation Event, or the first appearance of free oxygen in the earth’s atmosphere, is said to have occurred 2.4 billion years ago. But a recent study contests this, saying that it happened much earlier. Researchers at the University of Alberta in Canada contend there could be a link between the oxidation event and changes in chemical weathering on land. They used trace metal chromium, which is sensitive to oxidation reaction in marine sedimentary rocks, to determine the time of the oxidation event.

They found that until about 2.48 billion years ago chromium was confined to land. But in the following 160 million years, chromium levels in seawater increased. During this period aerobic bacteria evolved on land. “The end product of bacterial metabolism was that they generated sulfuric acid which then dissolved the surrounding rock,” says Kurt Konhauser, the lead researcher. Chromium leached from the rocks and dissolved in water.

The researchers studied iron formations from the Precambrian era, which is the early years of earth’s existence. They compiled database of chromium concentration in those iron formations. This helped determine the timing of oxidation. “We have demonstrated that the Great Oxidation Event occurred nearly 100 million years earlier than thought,” says Konhauser. The findings were published in the journal Nature on October 20.