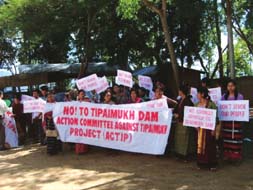 on february 22, 2007, clearance to the Tipaimukh dam project in Manipur was stalled for a second time because of lack of sufficient data submitted to the appraisal committee for the project's environmental impact assessment (eia).

The Expert Appraisal Committee for River Valley and Hydroelectric Projects under the Union ministry of environment and forests once again deferred clearance to the Tipaimukh Hydro Electric Project saying it had not received all the information it needed to clear the eia report of the project.

The North Eastern Electric Power Cooperation, the state government agency handling the project, said they were unable to do so due to high insurgency in the area.

But the Action Committee Against Tipaimukh Project, a coalition of 29 ngos, maintains that insurgency has always been there in the state. They claim a thorough eia was not carried out since the assessment was a mere formality with the prime minister's office (pmo) supporting the project.

Besides, they say the inauguration of the project by the Union ministry of power in December, was illegal. An expert appraisal committee member admitted that they have been under pressure from the pmo to clear the project when it was earlier considered in November 2006.

The prime minister was earlier supposed to have inaugurated the dam, which had led to large-scale protests (see 'Selective hearing', Down To Earth, December 31, 2006).