To kill a rock 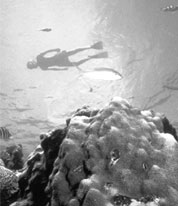 FOLLOWING a controversy regarding a permit issued by the wildlife and marine department of American Samoa, a ban on collection and export of live coral and basalt rocks from the Pacific Ocean territory has been issued recently. The industry has risen to the status of a multi-billion dollar enterprise during the last few years. These rocks, which are a home for a variety of living organisms, including coral reef fish, are being plundered indiscriminately and exported to the United States for decorating aquariums. "Preservation of our coral reefs should be a priority issue for the benefit of present and future generations," governor Tauese Sunia said in his Executive Order.

The corals, known to support more biodiversity than rain forests are already threatened by pollution, global warming and diseases. Mindless harvesting would only hasten their destruction.